Thank God mystery of latest major containers losses is solved. There’s no mystery, it’s all lashings, containers positioning, minimum stay requirements, and finally (and not surprisingly), lack of due control and check. This curious analysis was published by one of industry outlets, most conspicuous for its’ incessant hunt for any sensation, providing sensation is politically correct, doesn’t hurt any major “stakeholder”, and remains strictly in boundaries of mainstream agenda. This analysis, speaking broadly, is a poorly disguised attempt to divert attention of all interested/concerned parties from the root cause of recent major containers losses at high seas. Analysis doesn’t fool many, if article comments are of any judgment. Author of the article offers a purely socialistic, communist “solution” – more control, more checks, stricter regulations (and probably, stricter punishments for violators). Comrade author doesn’t know history. More control and stricter punishments, ever-growing number and size of controlling bodies and bureaucrats, never ever solve any problem. Moreover, stricter controls and punishments exacerbate the problem.

The whole crisis, be it major containers loss or “bottlenecks”, is in its’ essence, of purely socialist nature – socialism is a final stage of monopolization, that’s why socialistic economy was, is and will be utterly ineffective. Major accidents and bottlenecks are caused by the same major factor – uncontrolled monopolization, ruthless, thoughtless and irresponsible, elimination of all competitors and basically, of a free market. Container majors wiped out smaller companies by designing, building and operating, new giant container ships of unheard of sizes. 10,000 TEU – 15,000 TEU – 23,000 TEU… there’s seemingly, no limit in sight. The bigger is the capacity, the cheaper are transportation costs per container, leaving no chances of survival for any competitor not big enough to order and build monster ULCVs. Very few shipping companies, finger-counted actually, can afford such ships. All the safety regulations were bended and/or ignored, thanks to almighty majors lobbying inside all maritime bodies, responsible for safe design, construction and exploitation. It is highly likely, that the designers, builders and operators did have their doubts, from the very beginning, but they’ve been muted. These giant ships are unsafe, just by their sheer size. There are no existing, known technologies and materials, which are capable of providing guaranteed safe lashing and containers positioning on board of these awesome monsters. Regular lashings give up, being put under tremendous forces and stresses, begotten by gigantic force arms, derivative of ship’s enormous size and rolling/pitching. The same can be said about fire safety.

Why did it all come up with several major, unheard of before, losses, only recently, during last several months? Well, they were triggered by a “container crisis”, and bottlenecks in major container ports on all continents. So liner container ships, including ULCVs, suddenly had to take full load in order to meet exploding demand. I have no doubt – at all – that the ongoing crisis is of artificial nature, with several main factors contributing to it:
– parties benefiting from crisis most – Chinese producers, retail monopolists like Walmart, Amazon, etc., and major carriers – have had their hand in it, and I’m sure, they do and did a lot to keep crisis going;
– politically motivated parties also contributed to crisis (“sudden” positive tests outbreak among dockers in US West Coast ports is but one example), using it as a silver bullet in WEF Great Reset war against humanity;
– the whole global industry map is undergoing radical changes – with Western industries under demolition, Chinese producers are becoming the main factory of the world, flooding humankind with their cheap trash products. Main container routes therefore, also transform and change, decreasing to several main routes to carry Chinese goods to all parts of the world;
– nations globally –Western nations in particular – are losing their incomes, and have to look for cheaper goods. Rather sooner than later, they’ll have to buy less goods, even if it’s Chinese cheap goods.

So it’s a classic monopolization scheme with several industries occupied by monopolies, container shipping being one of such industries. We know, that such giants as Amazon, Walmart, COSTCO, etc., enjoyed unheard of profits during so-called “pandemic”, and continue to reap billions. They’ve been joined by major shipping monopolists. Their time has come.
What about all those AI, digitalization, fuel efficiency, etc., miracles, to benefit us all? Where are they, why didn’t they show up? All the container majors are on the frontlines of digitalization, AI implementation, logistics efficiency, management efficiency – it’s all so efficient and cost effective, that theoretically, we shouldn’t, we must not, have any bottlenecks, let alone skyrocketing freight rates. Why, say, Malaysian exporters were complaining about incessant container ocean rates increase since 2012? Long before “pandemic”, but shortly after majors crushed all smaller rivals, with the help of ULCV? Why Thai shippers yell a bloody murder, and Thai Gov have to respond somehow, to mitigate ruinous effect of allegedly, US-mostly “bottleneck crisis”, on a nation economy?

There’s no doubt, that this “container crisis” will dissipate, in a foreseen future, simply because there are no basics for it to continue – all the national economies of the world are either looking south or going south, Chinese economy being in the long run, no exception. World population is becoming more and more poor, many thanks to WEF, UN and the rest of the cabal. With crisis dissipation, ULCVs loads will return to more or less safe numbers. It doesn’t make ULCVs safer from major fires, it’s their inborn fault, but at least there won’t so many major containers losses.
What will be the future like beyond WEF Great Reset and UN Agenda 21, after they inevitably collapse? It’s obvious. There’s one guaranteed, successfully tested innumerous times, method, to make container ships (any type of ships) safe, reliable and cost-effective – it’s a diverse shipping market, driven predominantly, by small and middle sized companies, which value each and every their client, be it an individual with 1-2 containers, or a big corporation shipping hundreds and thousands containers monthly.
But today is the day of victorious socialism. It won’t last long, but it will bring upon us tremendous, unheard of, disasters and tragedies.
February 2021 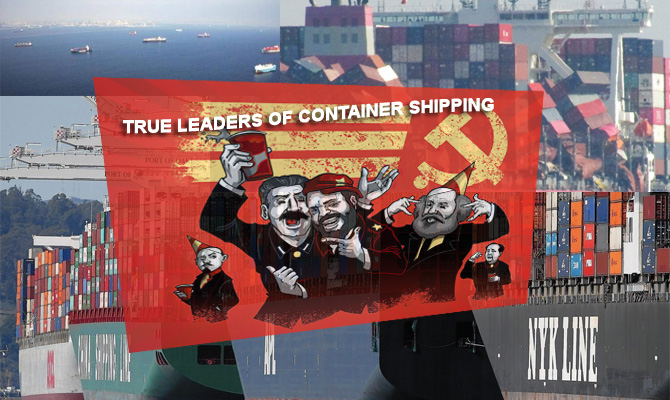