Details of container ship MOZART piracy attack have slowly become known, revealing a frightening picture of a new trend of total disregard of seamen lives, demonstrated by pirates. Until MOZART attack, all involved parties including pirates, did stick to some unwritten but mutually recognized rules – pirates hijacked crew but don’t physically harm them; owners pay ransom and get back unharmed crew. Being obviously, frustrated by continuous failed attempts to get crews out of citadels, pirates became real nasty and reckless, using explosives to break in citadel, and treating the crew they capture in a very cruel manner.
One crew was killed during the attack and citadel break-in, others were injured. Pirates kidnapped 15 crew, of 3 crew left on board, “ one was beaten and left with an injured leg, while another still aboard the ship had shrapnel wounds” (understood inflicted by explosion). The pirates also ransacked the ship and severely damaged bridge and navigational equipment, crippling the ship’s navigational capacity, so that the ship is incapable of continuing her scheduled voyage.
However frightening it might sound, but MOZART tragedy is probably, a Game Change event, an example of what’s to come and what to expect. If pirates make total disregard of human lives a rule, something to practice and stick to, blowing up citadels, killing and wounding the crews, then, Gulf of Guinea is to become a real war zone, bearing deadly risk for each and every seaman on board of the ships, trading in Gulf waters. It will become a deadly roulette.
What’s the best and only way to guarantee crews safety and curb the piracy? It’s well known way of armed protection for each and every ship, armed guards teams being the best option. Increasing military presence in the region is not an answer, as it was well demonstrated in Gulf of Aden. Now, when the world is sinking into chaos, triggered by globalist elites and their “pandemic”, establishing some international naval patrol force in the region seems to be an impossible undertaking. Armed guards on board, except provided by local security agencies or local navies, are illegal and will remain illegal, make no mistakes about it. Globalists, UN/WEF and many nations’ governments will never allow effective, armed self-defense for commons. Globalists and their national puppets fear armed commons much more than pirates – or to put it bluntly, they don’t give a damn about seamen safety.
So, seamen working in Gulf of Guinea, or about to sail to it’s waters, are advised to demand from owners guaranteed armed protection, or if refused, to sign off (or not sign on). Situation with piracy worldwide, not just in Gulf of Guinea, is deteriorating, and will continue to deteriorate, becoming unbearably bad and dangerous in some regions. Whom to “thank” for it? “Pandemic” chaos, which is ruining global economy, and devastating Third World and developing nations.

Previous news:
Container ship attacked, boarded, Gulf of Guinea UPDATES 1 crew killed 15 kidnapped
January 24, 2021
UPDATE Jan 24: According to management information, one seaman has suffered fatal injuries during the attack and 15 crew have been kidnapped. Killed crew is of Azerbaijan nationality, the rest are Turkish.
UPDATE Management Statement: Istanbul, January 24, 2021 – Managers Boden Denizcilik AS report that at appx 05.25 UTC this morning its container vessel Mozart with 19 crew came under attack of pirates whilst sailing in the Gulf of Guinea some 100 nautical miles off the coast of Sao Tome. Meanwhile contact has been established with the crew of the vessel who have taken shelter in the citadel of the ship. Immediately after the attack all relevant authorities have been notified and assistance has been asked from the navy.
Container ship MOZART was attacked and reportedly, boarded by pirates, at 0540 UTC Jan 23, WNW of Sao Tome, Gulf of Guinea, while en route from Lagos Nigeria to Cape Town South Africa. The ship stopped shortly after boarding, went adrift, was still adrift at the time of last received AIS position 0615 UTC Jan 23. awaiting further updates.
Container ship MOZART, IMO 9337274, dwt 39339, capacity 2824 TEU, built 2007, flag Liberia, manager BODEN DENIZCILIK AS, Istanbul. 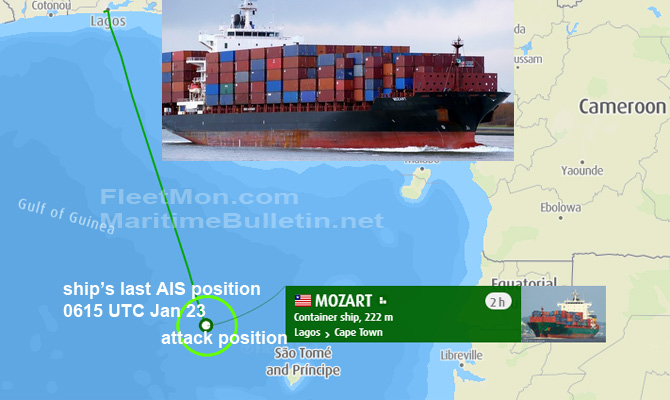