Cargo ship was boarded by armed pirates at around 0300 UTC Nov 30 in Conakry Anchorage waters, Guinea, West Africa. According to ships tracks and time/position of the attack, attacked ship most probably, is a Turkish general cargo ship TANGO REY. The ship docked at Conakry port on Nov 25, on Nov 26 she moved to Conakry anchorage and anchored in position where attack took place. She left anchorage and moved to port in about 4 hours after attack time, berthed. As of morning Dec 1, she remained berthed. Ship’s ID is not yet confirmed, no other details of the attack available, as of 0320 UTC Dec 1. Awaiting ship’s ID confirmation, updates.
UPDATE: Confirmed TANGO REY was attacked, 6 armed pirates boarded the ship and looted superstructure, living quarters, taking with them all personal and ship’s valuables they were able to find. 14 crew are safe. 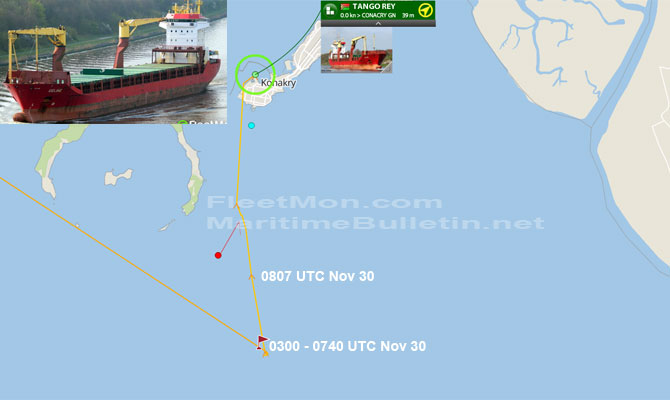