Nov 13 CORRECTION: Greek CG woke up on Nov 13 and blessed us with the news on Togo-flagged general cargo ship fire, which occurred on Nov 11 in Greek waters near Elafonisos islet, southernmost Peloponnese peninsula. Better late than never, I guess. Anyway, the fire occurred on board of general cargo ship AL HANI, not OSCAR I, as it was reported in initial news. Not hard to mistake, though – both ships were ballasting from Libya to Turkey, both are Togo-flagged and owned by Lebanon-based companies, both were in Elafonisos waters at the same time. More to that, OSCAR I turned north and anchored at Marathias anchorage, north of Elafonisos. She resumed her voyage on Nov 12. AL HANI meanwhile, was and still is off radar since late Oct, but understood, while en route, she anchored at Neapoli Voion anchorage, near Elafonisos, for reasons unknown. 14 crew were evacuated, fire reportedly, was extinguished. The ship remained at anchor and judging from fire pic, suffered serious damages – all superstructure looks to be engulfed in fire.
General cargo ship AL HANI, IMO 8314433, dwt 6479, built 1984, flag Togo, manager GLOBAL MANAGEMENT & TRADING, Lebanon. 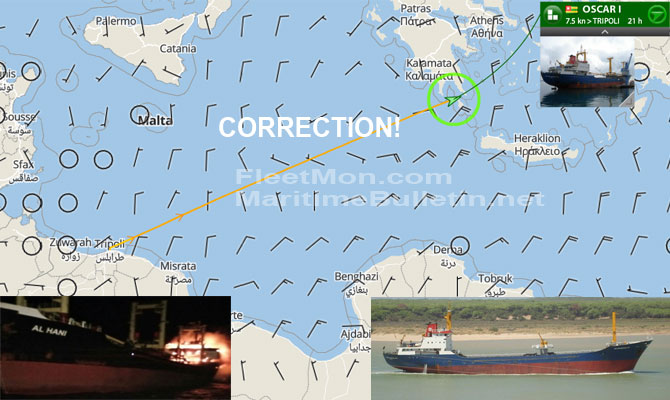