Nov 4 UPDATE: There were no mentions anywhere, in official statements or in media, that the ship sent distress or emergency signal/message, asking for help or shelter. She was ordered to interrupt her voyage and sail to Geraldton after flyover and AMSA decision to consider her to be a distressed ship. By the time the ship was ordered to sail to Geraldton, she was outside Australian territorial waters. So, what was it, and can it be considered as an unlawful seizure of the ship, sailing in international waters, based on sole decision of coastal authority? If Master and owner didn’t consider their ship to be in danger, why couldn’t they have their way? Why should they be ordered by some third party? Who’s in command of the ships – Masters, or land-based “authorities”?
The meaning and implications of this incident, are truly scaring. Depriving Master of his authority and command by shore-based bureaucrats’ orders, is a sure way to disasters, plus of course, as purely administrative practice, it will inevitably lead to malfeasance and corruption. But don’t you have any doubts about it – Master and Owner will be held responsible, not “maritime safety authority” bureaucrats, if/when disaster happens. It’s all in line with what’s unfolding on our damned planet, it’s all part of Great Reset. Commons do the job, have nothing, own nothing, but are held responsible for all the insane wrongs and faults of the ruling classes.

Nov 3 news: Livestock carrier BARKLY PEARL was ordered to interrupt her voyage and call Geraldton, Mid West Australia, in the evening Nov 2, in unclear circumstances. AMSA and Mid West Port Authority said, according to news outlets, that the ship suffered starboard hull breach and developed heavy list, so much so, that she had to be taken on tow, and towed to Geraldton, arriving there in the afternoon Nov 3 Local Time. The ship was reportedly, heading for Indonesia, with no livestock on board, in ballast.
Judging from video, there was no heavy list or any list, except rolling in rough seas. Hole in the hull looks like technical cut, and definitely, not like hull breach, i.e. like a hole inflicted by some kind of accident.
Was there any real accident and danger to ship, or was it something else?
…A damaged livestock carrier has been brought into Geraldton for safe harbour, with all crew reportedly in good health and not displaying any covid-like symptoms. The Australian Maritime Safety Authority (AMSA) ordered the MV Barkly Pearl into Geraldton Port after it sustained a damaged hull about 120 kilometres north of the Mid West town. It had been en route from Fremantle to Indonesia and had no livestock onboard. Vision of the vessel shows it listing with a hole in its starboard hull. AMSA response manager Mark Morrow said there were significant concerns about the vessel and its ability to safely reach Indonesia. “We held concerns about the integrity of the vessel and the potential for environmental issues,” Mr Morrow said.”As a result, AMSA issued a direction for the vessel to make its way to safety in the Port of Geraldton.”…
https://www.abc.net.au/news/2020-11-03/livestock-ship-limps-into-geraldton-with-hole-in-hull/12844696
It’s Australia and it’s AMSA, and we have a rather murky description of the events and accident, if there was one. Australian Authorities as of recent, are about as trustworthy, as North Korean or Chinese ones. So, what happened? It’s a mystery. Maybe they’ll charge owner with towage/port and some other fees, plus fine for not being “seaworthy”, and release the ship. Maybe they’ll decide to find some positive-tested crew, for reasons of their own. Anything is possible in nowadays Australia, land of authoritarian regime.
Livestock carrier BARKLY PEARL, IMO 9042295, GT 5375, built 1993, flag Marshall Islands, manager DRAKO SHIPPING PTE LTD, Singapore (EQUASIS). 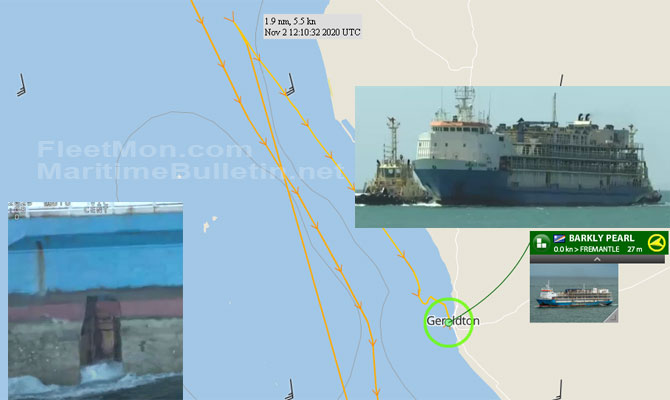 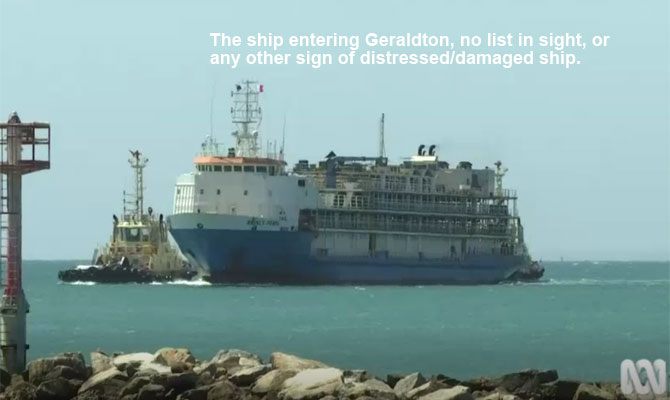 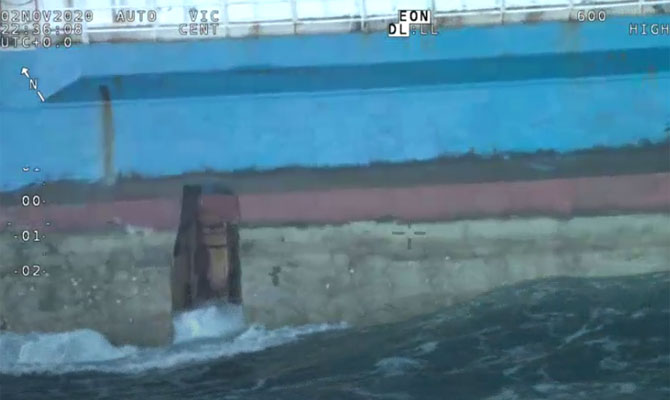