There are several reasons to reconsider signing on the ship, presently, with each of these reasons being substantial enough in itself, to quit the seas, either for good, or just to wait out until the ongoing madness will end, one way or another.
Reason 1: All seamen are lab rats.
All seamen are lab rats, when it comes to new health requirements, regulations, vaccines, checks, etc. They’re most vulnerable to anything healthcare related, not in terms of real health care, but in terms of implemented mandatory rules or medicines. They can’t refuse inoculation, under the threat of becoming an illegal person with invalid papers, incapable of leaving or boarding the ship.
…A new study related to the effectiveness of vaccines tells us what we have already known for decades: exposure to the virus contained in vaccines, which belong to prior strains of the flu enable our bodies to react against those old strains, but not to the current version of the flu, which is why it does not really protect us from the desired strains.
Once our body has had contact with a pathogen, it saves the memory of it to respond more quickly in subsequent contacts. This is what is called natural immunity, which is real, effective immunity. It is different from vaccine-induced immunity, which is not real and that suppresses the body’s natural and effective immune response to pathogens.
https://real-agenda.com/world-3/the-flu-vaccine-scam-is-exposed-again/
…
The point is, this vaccine jab isn’t the only one, the magic inoculation which will make us all free, and return our lives to some kind of a normal life as we understand it. Not at all. Mankind will be vaccinated at least twice a year, for many years to come (till the end of time) with absolutely unknown to us, untested and very poorly presented, substance. Each time it will be a new one. Ships crews are perfect lab rats, encapsulated into ideal environment for monitoring the results of the vaccination. I believe, WHO and the rest of the cabal, were greatly disappointed by the effectiveness of “deadly virus” affecting shipping industry. “Deadly virus” was a total failure – from their perspective, of course. Be it anywhere close to promised, computer-modeled “deadly” status, half of global merchant fleet would be, by now, immobilized.
People living and working on land will have kind of a safety time-airbag, to dodge immediate vaccination and watch those who’ll be first in line for vaccine, and there will be plenty of such, just look at idiots wearing masks whether demanded or not – they’re eager to get the jab, so they will be the test rats, both for globalists, and for normal people. In shipping, everybody will be vaccinated as soon, as it will be technically possible.
Reason 2. Profession of a seaman is becoming increasingly risky one.
The routes for on- and off- signers are a risk in itself, and there’s no visible end or solution, to worldwide lockdowns and insane restrictions, vaccine or not.
There’s a growing risk of piracy and robbery – seaborn crime is on the rise, and if/when anti human agenda of UN/WEF (Great Reset) comes into force, crime wave will – not may, will – rise to a tsunami. It won’t be just your ordinary robbery and piracy, new-wave “pirates” will be attacking ships to get food and basic essentials, like soap or any clothes, or towels. The EU won’t stay immune to it, EU already has more than enough potential (including former) pirates – I refer to, of course, illegal migrants. UN/WEF are sowing chaos, and if they’re not stopped anytime soon, chaos it will be, read the history, folks. Ships and crews are defenceless and will remain defenceless, at least legally (if existing legislation can be considered as lawful), not by some mistake or oversight, but intentionally. Globalists did and do everything they can to disarm peoples, it’s one of their main goals. Self-defence is a crime, according to New World Order and any of their Agendas – Green, or UN-2021, or WEF’s Great Reset.
Reason 3. Increasing criminalization of the shipping and seamen.
Everything is a crime. Nations throughout the world, especially developing (island nations, specifically) ones, made a sport of hunting seamen and indicting them for crimes they didn’t commit, be it drug trafficking or “environmental” crimes, like this recent shameful case of prosecuting the Master of VLCC NEW DIAMOND.
Being a normal man is indeed, a crime in itself, if you watch mainstream trends. People who work, who raise children, who keep the mankind alive, are under constant attacks. They “destroy the environment”, they’re “racist” and misogynistic, they’re everything bad, as long as they keep doing their job and keep families. All the human scum and filth, on the contrary, is hailed as heroes or victims, as an example to follow – be they BLM, socialists, Antifa, politicians, investigative f…g journalists, human traffickers, greens, poor innocent migrants or NGO staffers. Those who take not give, who destroy, who kill, loot and rape, who deceive others with their fakes and shams, are the heroes. Those who’re honest and hard-working professionals, are criminals.
Criminalization of the shipping and seamen will continue, this policy is an important ingredient of NWO implementation plan.
Reason 4. What about your families?
The threat of chaos, economical and political crisis, is very real – it’s in fact, the main goal of UN/WEF – to throw mankind into chaos, and on the wake of it, to grab the power. Read the history, folks. Russian Revolution and Bolsheviks, or Chinese CCP victory, it’s all the same, nothing is new under the sun. Will you be more needed by your family, your children, at home, if/when chaos befalls upon your country, or somewhere in far-off seas, earning money, which for all we know, will become worthless?

It’s all personal, depending on each person’s individual circumstances and situation. Some seamen just can’t feed and keep their families at their homeland, due to mass unemployment and prevailing poverty. They have to go to sea. But some – the majority – can keep their families, staying home, though probably, not as well as with seaman salary. You have to decide for yourself, and weigh all pros and cons. But you better do it, at least give it a thought, or you may, in very near future, greatly regret your nonchalance. 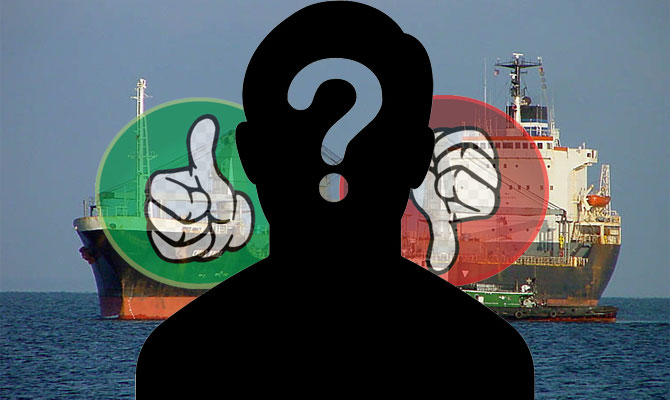