The UK based Ocean Cruising Club yesterday (Sep 19) received official notice that foreign yachts waiting to leave the Pacific will not be allowed in to New Zealand, and must now make immediate, alternative arrangements. The club has been liaising with New Zealand immigration and maritime agencies to find a way that would allow up to 300 yachts to sail here on the seasonal cruising route.
Yachts traditionally headed south to New Zealand each summer. Many conducted refits at yards around the country, and cruised New Zealand’s coastline, visiting towns and cities along the way.The ocean cruising club was told that maritime border restrictions applied under the current Covid-19 public health response.
…Ministry of Health advice had led the Director General of Health to determine that a potential future cyclone did not provide sufficient basis to warrant an exemption from the order. “Therefore there is no compelling need for the ships in question to arrive in New Zealand for humanitarian reasons”.
“Unfortunately, despite many explanatory letters and emails, health officials do not appreciate most yachts cannot sail to safe harbour in their own countries. Nor do they understand yachts need to be safely out of the cyclone zone before the cyclone season occurs, and not at sea when one occurs.” – club’s roving rear commodore Guy Chester told RNZ.
A Ministry spokesperson said “The proposal for 300 to 350 yachts or small craft with up to 1000 people to arrive in New Zealand from the Pacific, many from areas of high Covid-19 risk, would pose significant public health risk.” The spokesperson said ships and boats in distress would be allowed to enter New Zealand, but any deliberate attempt to contravene this rule could result in harsh penalties including either a fine, imprisonment or forfeiture of the vessel.
https://www.rnz.co.nz/news/national/426508/foreign-yachties-say-lives-now-at-risk-from-nz-decision

Low-cost sailing yachts have no place in green sustainable beautiful future
It will be a mistake to take this ban for an overcautious and unnecessary respond to public health threat. It is not. It’s a direct hit, aimed at low-cost sailing yachts sector, with NZ chosen as perfect testing grounds. New World Order, UN Agenda 2021, can’t and won’t tolerate anything free, anyone out of their control, and what are small sailing yachts, sailing throughout the world at their owners’ will, if not an epitome of freedom? Coastal yachting will be allowed for some time (to be killed slowly, by ever growing costs), but not international, worldwide one.
Said UN Agenda 2021 – “nobody will be left behind”. They “forgot” to add the word “free” – “nobody free will be left behind”, that’s their real goal.
NZ is indeed, a perfect testing ground for globalists war against humanity, like Victoria and Melbourne in Australia, or Dems-run coastal mega cities in the US. Country’s PM is a zealous, committed socialist/communist, very poorly educated (indoctrinated), pitifully ignorant of anything beyond socialist/green agenda, with very close ties to CCP, China and international socialist movement – a frightening person in all respects. And with all that, she’s ruthless, a “must” for any revolutionary politician in any era and any country. Read what Lenin or Trotsky said (and practiced it) on the necessity of being above the “so-called humanitarian concerns”, being as cruel and merciless, as it takes, apply it to her, and you’ll see, that she fits perfectly.
I’ve been writing about Cruise sector extermination threat for some two years. Well, cruise sector is already extinct. I’ve been wondering for some months already, what will happen to small ocean-going sailing yachts, like family cruisers. For all I know, this free world of free people just can’t be tolerated by New World Order, and must be exterminated. Here it comes, first blow.
And of course, the war on yachts doesn’t embrace mega and luxury yachts of the elites – they’re and will stay free, to roam the oceans. Without us smelly serfs, littering oceans with our cheap boats, and spoiling elites feeling of being the only ones, the chosen ones, to enjoy the world and world’s beauty.
Hey, useful idiots, still afraid of Climate Change and “pandemic”? 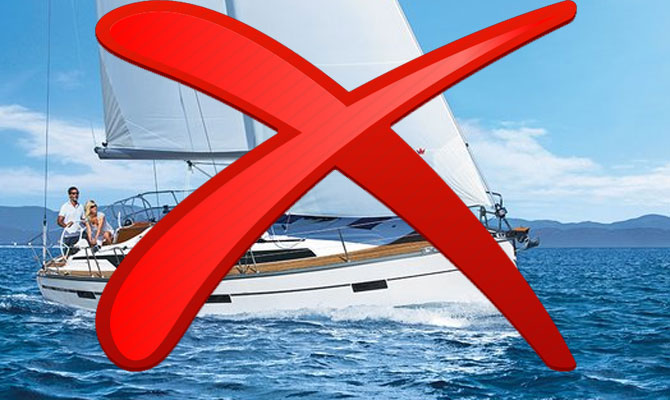