There was no major disaster, to the great relief of all the shipping industry. I can’t imagine the scale of hysterical media respond in case fire spreads to cargo tanks. In fact, hysterical media respond to any maritime accident, followed by even slightest oil leak, is much more threat to shipping and economy, than any disaster, even major one. Governments worldwide already made a sport of it – anything happens, any accident, and Govs immediately (and happily) respond with bans, restrictions, new regulations and so-called “laws”. NZ suspended cattle export after GULF LIVESTOCK tragedy, as if cattle was the cause of ship’s sinking. Beirut and WAKAISHO disasters resulted in amazingly stupid and ignorant mainstream media campaign, aimed at FOCs. There’s no space left in mainstream and industry media, for common sense and professional judgment. As if it’s not enough, any attempt to apply common sense, professionalism and real facts, is slated by mainstream, as “conspiracy theory” or “hate speech”, or racism.
It is said, that NEW DIAMOND engine room fire was preceded by explosion. Too many accidents of engine room explosion and fire starting this year, for being a coincidence. Something is behind it. According to available information, it can be tied to fuel types mess, especially after implemented infamous Sulphur Cap, and to some extent, to crews change crisis. Will mainstream and industry media dig into these strange accidents? No, they won’t, because it will immediately put them on a divergent with NWO narrative, course.
Winding it up, it’s not just NEW DIAMOND escaping major disaster, it’s all of shipping.
Here’s a paradox of modern times, which amazes me – how come, that nations which once rule the waves, now rule the legislation chicanery? Physically, if we look at sea labor statistics, waves are ruled by other nations, while former commanders of the seas created and rule poisonous and corrupt swamp of legislation and climate change hoax industry. 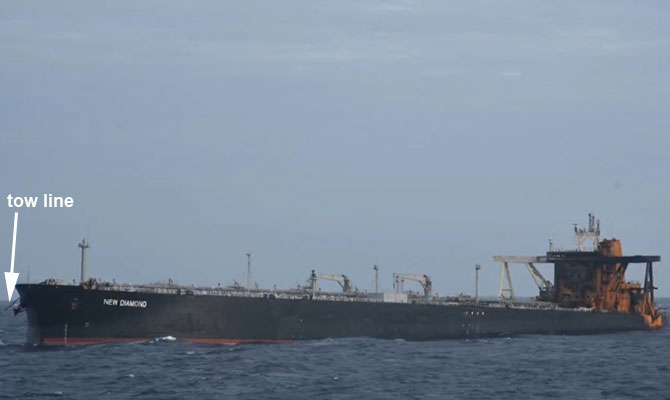