I. GULF LIVESTOCK 1 tragedy is force majeure case.
Understandably, the tragedy of GULF LIVESTOCK 1, became and still remains, one of the top stories in world media. Owner of the ship, Gulf Navigation Holding PJSC, published an official statement on Sep 8:
Two of our valued Filipino seafarers have been rescued by the Japanese Coast Guard, while body of a further crew member was later found in a life raft and taken on-board by the Japanese rescue craft. The remaining 40 on board comprising 36 Filipinos, two New Zealand nationals and two Australians are feared lost, although we hope and pray that others may be found alive. The search for survivors was called off late on Friday 4 September with the approaching Typhoon Haishem soon to be in the area. The Japanese Coast Guard hope to conduct further air searches when this typhoon has passed through.
It’s a tragedy, and of course, all concerned are looking for a decisive answer to the main questions of how did it become possible, why did it happen and who is to blame.
Afraid this tragedy is one of those which will remain, at least partially, a mystery. There’s no question of technical, physical character of the disaster – the ship was caught in severe typhoon, reportedly was disabled after engine failure, and as soon as she was disabled, she was doomed, considering her type and design, with very high, ship’s length-long, livestock compartments superstructure.
So the main question is, why the ship headed straight into typhoon. I reject the versions of ship’s commanding officers, Master first of all, being too careless or having poor professional skills, or because they yielded to some outside demand to stick to plotted track and schedule.
Only those who were on the bridge, can explain their decision to keep plotted course. So in all probability, we won’t ever find out the factors which determine their decision, their calculations, their reasoning. For example – they believed typhoon would turn due north, or slow down and remain stationary, and it will be safer to continue sailing as plotted, enter East China sea, and find shelter behind archipelago. Or maybe, there was a point of no return, after they were already in typhoon periphery, when they couldn’t make sharp turn to take divergent with typhoon track course, without serious threat of capsizing.
I would categorize this disaster as a clear and pure force majeure case, with human factor being secondary, and mighty Nature factor being primary.

II. How to make ships unsafe.
But nowadays, each and every such tragedy or disaster, immediately transforms into political issue, to prove globalists agenda, and dire need of total control. New type of control is of course, an electronic control, which embraces all types of modern electronic wizardry, from satellites to AIS to supercomputers and cloudchains. Today’s leader in this new, very dangerous, trend, most popular in mainstream media and most touted, is a company WINWARD. Here’s the zest of it all:
…proactively contact the ship beforehand and suggest better navigational standards. Flagging the handful of ships that are of higher risk starts by looking at what technology can provide rather than letting humans grapple with the traditional ways of doing things. This is not solely to make the operations and activities more efficient but to enable both governments and business to use the vast amount of data and resources available today to not react after a disaster, but to prevent them from happening in the first place.
Translation from this perfect Orwellian language is simple – to let outsiders (companies like this Winward thing; governmental and international bodies), directly affect Captains’ decision making. It’s already happening. Typhoon prior to typhoon Maysak, which sunk GULF LIVESTOCK 1, hit Korean waters. Ships in Ulsan port were ordered to leave the port beforehand, and strongly advised to sail in NW direction in Yellow sea, and wait out until typhoon passes. One bulk carrier though, disobeyed this order. The ship left Ulsan port as ordered, but sailed in southern direction, apparently guided by Master’s own decision making and his own typhoon track forecast. Master was correct in his calculations. Typhoon didn’t move due north as officially predicted, but suddenly moved west, and dissolved. Korean Maritime Authorities have been demanding from Captain to follow their orders for some two days, and… decided to punish ship owner for Master disobedience. Company is to be fined. Authorities admitted correctness of Master’s decision, but he disobeyed.
100% guaranteed forecast of typhoon track is still impossible, it’s beyond modern science capacities. But there’s no problem in predicting the consequences of “innovations” like the one pushed by WINWARD – … to harness data to stay on top of dynamic events and emerging trends…. by fusing maritime data and artificial intelligence. Interference with Captain’s decision making is a direct threat to ship’s safety, it’s an axiom from times immemorial.
Classifying ships as risky or not too risky, and on the base of this universal classification, banning ships from sailing or restricting their trade, is controversial issue in itself, but unquestionably, negative, if such classification is to be carried out and maintained by some outside “innovative” companies. All your AI and cloudchains and supercomputers can’t and won’t in foreseen future, replace a human professional, and if you don’t believe me, go watch lectures given by prominent modern scientists, on enormous complexity of just one living cell, let alone human organism. Be it not so, shipping companies, here and there, wouldn’t stop using A1 most advanced ships’ systems, replacing them with good old engineers.
There’s no secret in motivations of the majority of “innovative” hi-tech companies, plaguing modern shipping and mankind, with their irresponsible, dangerous and dystopian “solutions”. They offer new ways of controlling shipping or any other industry, bearing no responsibility for the consequences, but commanding and controlling those who do real job, and profiting from it. They are not innovative, strictly speaking. They’re mutations of bureaucracy, generated by false belief in hi-tech limitless power. 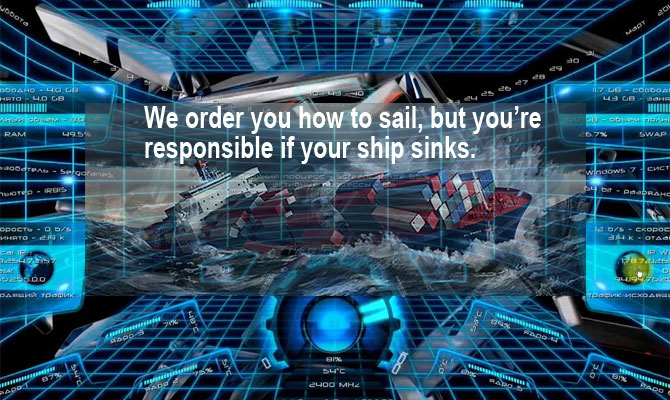