UPDATE 0930 UTC: Confirmed Dutch reefer WATER PHOENIX was boarded, situation unclear. Some crew were probably, kidnapped. the ship os of 09300 UTC, was still adrift with AIS on, no Navy or security boats nearby.

Merchant ship was attacked in the morning Sep 8 some 30 nm south of Lagos, Nigeria. Attacked ship wasn’t identified, but according to ships tracks in the area, it is most probably, Dutch reefer WATER PHOENIX, and it looks like she was boarded. The en route to Lagos with ETA Sep 8 suddenly stopped and as of 0630 UTC remains in the same position, with operational AIS.
Awaiting ship’s ID confirmation and more details.
Reefer WATER PHOENIX, IMO 9045168, dwt 8005, built 1992, flag Liberia, manager SEATRADE GRONINGEN BV (EQUASIS). 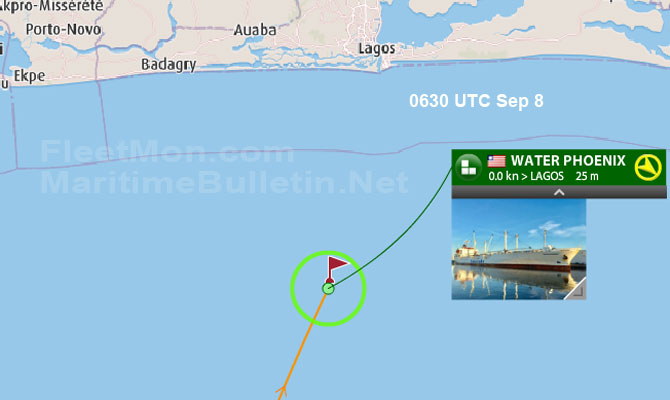