Aug 22 UPDATE: Tanker AEGEAN II wasn’t hijacked by pirates, she was boarded by local militia, and there was some kind of dispute/conflict, but understood, nobody was injured. Tanker left Bereeda anchorage in the evening Aug 21, sailed to Bosaso Puntalnd, and at 1730 UTC Aug 22 entered Bosaso anchorage area.

Aug 20: Chemical tanker AEGEAN II allegedly was boarded and hijacked by armed men in Somalia waters on Aug 19, while en route from UAE to Mogadishu, Somalia. According to track, tanker changed course in the morning Aug 16, and headed for Horn of Africa, she was anchored off Bereeda, Puntalnd, in the evening Aug 19, after some 2-days cruising off Bereeda. It is said, that tanker encountered mechanical problems and was sailing at a slow speed towards Mogadishu, until Aug 16, when she was, presumably, attacked.
Situation isn’t clear. It may be an act of piracy, but it may be as well, some commercial or other dispute, which led to ship’s seizure, if it’s seizure.
Chemical tanker AEGEAN II, IMO 9016911, dwt 8104, built 1994, flag Panama, manager HANAN SHIPPING LLC, UAE. 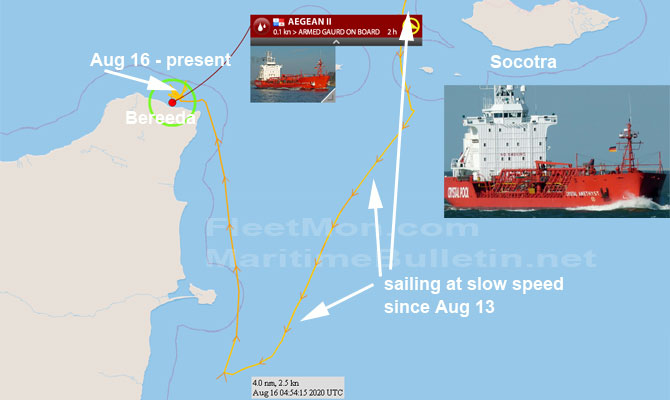