Aug 14 UPDATE: The ship moved to Lavrio, either towed or escorted, at a reduced speed, was anchored at around 0000 UTC Aug 14. As of 0515 UTC Aug 14, remained in the same position. Fire probably, damaged engine or other machinery.
Aug 13: Greek media reported fire on board of Marshall Islands flagged cargo ship in Kafirea Strait, Aegean sea, Greece, which occurred on Aug 13. Fire was said to be quickly extinguished by the crew, but some SAR boats responded. The ship wasn’t identified. According to available information and ships tracks, it is most probably, bulk carrier STAR CLEO, ballasting from Turkey to Gibraltar. She reduced speed at around 1330 UTC and changed course. As of 1740 UTC, she was either adrift, or moving at a slow speed, no tugs in sight.
Bulk carrier STAR CLEO, IMO 9594638, dwt 56581, built 2011, flag Marshall Islands, manager TECHNOMAR SHIPPING INC-LIB, Greece. 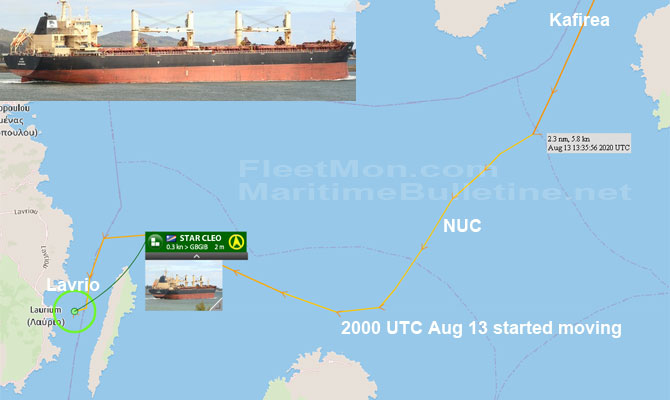