Two incidents with two bulk carriers occurred in Australia recently, with all usual stuff – “underpayment”, ITF, Maritime Union of Australia MUA, AMSA and biased media. I will skip “underpayment” part of the story, and with that, the first incident, in which AMSA has banned bulk carrier TW HAMBURG from Australian ports for 12 months. As well, I won’t go into underpayment part of another story, involving bulk carrier UNISON JASPER. There’s absolutely no meaning, no sense, in writing about “underpayment” cases, as long as they are instigated by ITF and its’ minions. We know and hear only what ITF says, we never hear from shipowners. They’re bad guys, ITF are good guys, and this is it. No media ever, tried to dig deeper, and interview owners and crews, without trade union goons nearby. Well, they’re all – media and good trade union fellas – the same, part of a “new bolschevik normal”, nothing to wonder at. I address shipowners and crews again – you may, if you dare, if you’re desperate enough to understand, that you have nothing to lose in “new normal”, send your story to Maritime Bulletin, it will be published.
Incident with UNISON JASPER is much more interesting or outrageous, depending on what side one’s on, whether he’s immersed in “new normal” to the depth of no-return, or he’s still a rational and sensible human being.
UNISON JASPER had been detained at Koorgang Island, Newcastle, on Jul 31 by AMSA, after seafarers complained about being mistreated, fatigued and underpaid. 11 Burmese crew who had come off the vessel had been taken to Sydney under police escort and were now at a motel starting 14 days of quarantine. The virus isolation was “a bit ironic seeing they have been in isolation on the ship for 14 months”, said Australian ITF coordinator Dean Summer. He said AMSA and ITF were being “pressured” to have the vessel moved from the Kooragang 3 alumina berth to another wharf.
The MUA’s national secretary Paddy Crumlin said “This vessel – with seafarers intimidated, robbed of their wages, and forced to remain on board for up to 14 months – reveals an extreme form of exploitation that has no place in Australian waters,”.
ITWF national coordinator Dean Summers said “…these seafarers have been on board for 14 months without a day off; in fact, 14 months without stepping foot off that ship,”.
And now it’s time for questions:
Are Australian trade union leaders aware, that hundreds of ships calling Australia, are having the same problem of crew change? That there’s no hub in the region, including all East Asia, where crew changes are possible?
“… police coordinated exemptions so Burmese crew could be transferred to a hotel for quarantine and then eventually flown home.” – what about other crews? Can’t police and all related agencies, coordinate mass exemptions?
Who and how forced the crew to stay on board? Shipowner sent in team of toughs, to prevent seamen from stepping foot on land? Or are they (and all other crews of all other ships) prevented from crew change and land walks, by Australian authorities? By the way, stepping a foot off the ship in Australia wasn’t all that easy in pre-pandemic era, either, thanks to AMSA regulations.
As of morning Aug 4, UNISON JASPER was still berthed at Newcastle. Will Australian authorities allow new crew to arrive to Australia, and board the ship? If they will, why don’t they practice it en mass, why do they keep the practice, which facilitates “extreme form of exploitation”?
What will happen to Burmese crew who’re now in quarantine? Will they be able to return home, how and when? Who will pay for their repatriation, if, say, owner goes bankrupt, thanks to tireless efforts of ITF/MUA/AMSA?
Why this specific bulk carrier was so brutally attacked? Well, here’s one side of the story explaining, why Taiwanese owner was targeted:
The MUA’s national secretary Paddy Crumlin said the UNISON JASPER had been given a temporary licence by Canberra for the run between Gladstone and Newcastle. The ITF and its affiliate MUA have long campaigned against the use of foreign ships and crew on coastal voyages that were traditionally done by Australian vessels and crew before the deregulation of shipping allowed so-called “flag of convenience” vessels into the domestic maritime trade.
I don’t know how justifiable is a long-time struggle against foreign ships in Australian cabotage, but for all I know, any struggle should be a fair struggle, not a backstabbing, especially in most demanding times. On the other hand, there’s no place in “new normal” era for such stupid and obsolete things, as conscience, courage, fair play, morals, etc. I said it many times – NWO is targeting everything independent, be it State or industry, shipowner or family-owned restaurant. Trade unions, PSCs, maritime bodies, media and politicians are nothing but weapons in NWO war against humanity. They’re, essentially, robots, manipulated killer machines, without brains or will of their own.
Bulk carrier UNISON JASPER, IMO 9838436, dwt 27296, built 2019, flag HK.
Bulk carrier TW HAMBURG, IMO 9603520, dwt 93225, built 2012, flag Liberia. 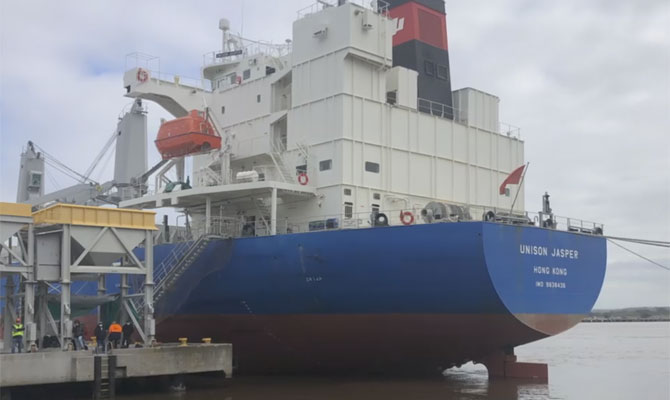