Croatian bulk carrier PERISTIL is in state of emergency, because of a tense situation on board, caused by long overdue crew change. 14 out of total 21 crew are to be changed for quite some time already, conflicts and even fight among crew reportedly, took place recently. The ship is en route from Bayuguan China, Bohai sea, to Indonesia, as of Jun 28 she was sailing in northwest East China sea, ETA to Indonesian port Jul 6. Understood PERISTIL is in ballast, chartered to take cargo in Indonesia, which is to be delivered to China. Managing company JADROPLOV is planning Hong Kong call, to change crew, during a return trip from Indonesia, to minimize financial losses. Singapore and South Korea, according to management, aren’t an option, thanks to very complicated procedures and practices. In South Korea, said management, sign–off seamen have to undergo 14-day quarantine in terse conditions, being settled in containers.
Crew change procedures must be carried out in easiest manner possible, excluding prison-like “quarantine” and humanly insulting, humiliating transfer procedures.
ADVISE:
In Soviet Union, merchant marine seamen were in about the same situation modern seamen found themselves nowadays – crew changes could be carried out only in Soviet ports, 8, 12 and more months working periods were usual practice, nobody even thought about complaining and demanding relief. Wise Captains, when crew were becoming tense and conflict-prone, practiced a very good method to let out steam and release tension. They’ve been throwing out parties at whatever pretext they could think of, letting crew to booze and talk and dispute, even to fight, if things come to that. One party night was enough to make crew compliant and subdued for at least a month to come, with all conflicts solved and forgotten, and peace restored. Booze and alcohol-laced parties were, officially, prohibited, but shore managers understood better, and in majority of cases, were closing their eyes.
I address my advise to responsible and sensible grown-ups – owners and managers, not to sanctimonious imbeciles, who’re running (ruining) shipping, and countless charity NGOs. Try this method. It was practiced for decades, and never failed. Seamen are red-blooded men, many of whom now need some kind of relax, some way to let the steam out.
Bulk carrier PERISTIL, IMO 9519626, dwt 17852, built 2010, flag Croatia, manager JADROPLOV. 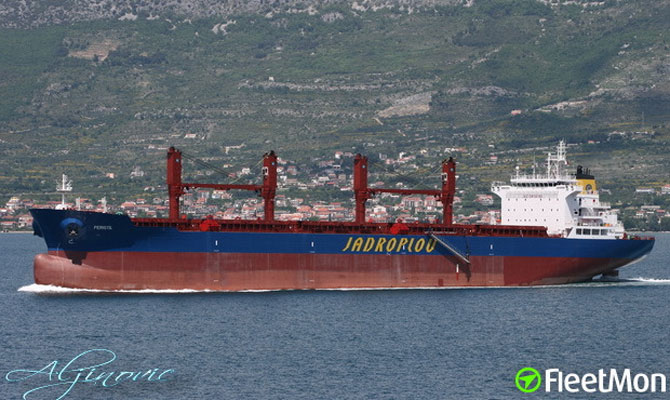