MB received a letter with an official statement of bulk carrier VIENNA WOOD N managing company, presenting their version of collision off Mindanao, Philippines. Frankly, I wasn’t surprised at all, because I have had my doubts in Philippines official narrative from the very beginning, doubts arising just from ship’s track analysis. Time and positions of the track don’t corroborate Philippinese version, and now it is confirmed by managing company:
Vienna Wood N – collision in the Philippines
Late at night on Saturday, 27 June, our bulk carrier, Vienna Wood N collided with an object thought to be a fishing boat off the coast of Mindoro Island, Philippines.
Vienna Wood N stopped and the crew conducted an emergency damage assessment. The collision was reported soon after to Maritime Rescue Coordination Centre (MRCC), Manila.
The crew inspected the damage sustained in order to ascertain if it compromised Vienna Wood N’s own safety and stability and then returned to the location of the collision to search for survivors. An overturned hull of what appeared to be a small vessel was spotted and reported to the Coast Guard, no survivors have been found.
Our thoughts are very much with the missing individuals and with their families.
Vienna Wood N remained on scene until the Philippines Coast Guard arrived.
Once the Coast Guard arrived, Vienna Wood N remained on scene until cleared to sail to a nearby port for surveys and repairs of the damages she sustained. She was escorted by the Coast Guard to Batangas Bay, Philippines.
The Owners, Ship Managers and the Crew are cooperating fully with the authorities as part of the ongoing investigation. 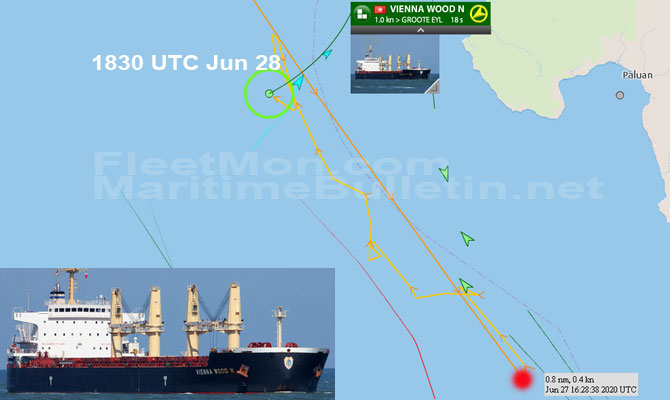