Today (May 31) is a so-called “World NO Tobacco Day”, observed every year and inspired of course, by the WHO/UN. They are short of words, to describe all the evils of tobacco. Adriana Blanco Marquizo, head of the WHO Framework Convention on Tobacco Control, said: “Smoking a cigarette is so dangerous, it’s very difficult to find something that is more dangerous.” “Medics” said, that “Smokers who contract the new coronavirus are likely to suffer from up to 14 times more severe conditions than the normal person”. Well, how about these studies, which said absolutely the opposite:
https://www.express.co.uk/life-style/health/1269815/coronavirus-smoking-chinese-study-nicotine-pneumonia
http://www.rfi.fr/en/science-and-technology/20200423-french-researchers-suggest-nicotine-could-protect-against-covid-19
https://www.dailymail.co.uk/news/article-8214749/David-Hockney-claims-smoking-cigarettes-PROTECT-against-coronavirus.html
But it’s not the point. The point is, I’m becoming more and more curious, why WHO/UN/globalists/leftists hate smoke so much, lying, falsifying data and statistics, persecuting and smearing smokers, and robbing them by making cigarettes insanely expensive. Their hate is bottomless and on the face of it, irrational. They hate and fear tobacco, like you know, vampires hate and fear holy water and daylight. What is it in tobacco, that made it one of the main enemies of anti human UN Agenda 2030?
Let me try another approach, illustrated by another example. Russian government is fighting “pandemic” by implementing one of the most severe lockdown regimes on the planet. Russian government doesn’t assist people who lost their jobs, at all, unlike EU or USA or Thailand. It looks like Kremlin decided to get rid of as many SMEs and middle class citizen, as possible, by ruining their businesses. Education and healthcare systems are also under full-scale attack, and the impression is, their dismantling is conscientious and intentional act. Elderly people are dying from lockdowns and from inaccessibility of health care and hospitals. Children are under threat of ruined immune system, thanks to lockdowns. “Pandemic” or no “pandemic”, Russian pensions are so small (some 150 USD, on average), that they hardly cover water and electricity bills, so literally, Russian elders, those who can’t work or don’t have relatives, are sentenced to slow and painful death. With all that said, Russian government is relentlessly and mercilessly persecuting smokers, brandishing its’ anti-tobacco campaign as an example of governmental work on improving and ensuring public health. Those same monsters who kill their own people, their own citizen, who can’t care less about them, or be more hostile, tout No Tobacco psychotic acts as the biggest health care achievement? They’re killing the nation, they’re depopulating the country by their genocidal, globalist policies, and the same monsters are doing everything they can to stop smoking. Something is very smelly here, don’t you think?
Adriana Blanco Marquizo said, that smoking a cigarette is so dangerous, it’s very difficult to find something that is more dangerous. Why, Adriana? I can shoot out a dozen things at least, which are much more dangerous than tobacco. Like your WHO activities, like UN Agenda, like worldwide compulsory vaccination, like China-style total control of the population…
Tobacco, it seems, has something in it, some effects, which scare lovers of total control and slavery, called “New Normal” and “Green New World”, so much, that they wage a deadly war on it.
Academicians and historians still wonder, how come, that so many people in Soviet Union, or Communist China, or Nazi Germany, turned into monsters, killing machines, making possible all the atrocities and genocides, and mass murders. No problem, guys, the answer is right before your eyes, if you open them. Go to posts and news on tobacco theme, and read the comments. It’s a hate speech at its’ highest. Smoke fighters are craving for repressions and prosecutions, calling for it. You know who they are, those aggressive smoke fighters, from psychological, psychiatric point of view? They’re latent sadists, too cowardly to indulge in their brutal instincts openly, but all too willing to satisfy their dark side, when allowed, and more than that – incited, to do it, in the name of Very Big Good, so Big and so Good, that it justifies any crime, however gruesome.
Smoke habit will survive, and is bound to revive. There’s no better way to get a minute relaxation, to think over something, to cool down or to talk to a stranger, than to smoke a cigarette. Monsters who’re trying to depopulate planet, who’re trying to enslave us, are bound to lose. They will lose anti tobacco war, too. 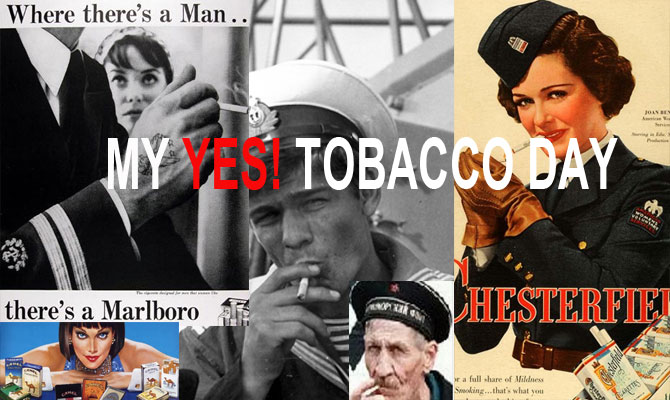