May 29 UPDATE: It appeared, that YUAN HUA HU had suffered damage to engine shaft seals and repairs require shipyard, so tanker is to be towed to Durban. As of 1600 UTC, tanker was in the same position anchored off Port St Johns, with tug SMIT SIYANDA standing by, awaiting the arrival of more powerful tug, required for towage.

Supertanker YUAN HUA HU encountered unidentified problems late May 25 NE of Port Elizabeth, South Africa, while en route from Singapore to Angola. The ship headed for nearest port, Port St Johns, and reached it in the afternoon May 27, understood under tow. She was anchored, and as of 1830 UTC May 27, remained at anchor. SAR tug SMIT SIYANDA is on standby at VLCC side, big ocean going tug is steaming from Cape Town to tow disabled tanker to unnamed port. No other details available at the moment. Crew reported safe, so probably tanker is troubled with mechanical breakdown.
Very Large Crude Carrier YUAN HUA HU, IMO 9723588, dwt 308663, built 2015, flag China, manager COSCO SHIPPING ENERGY TRANS. 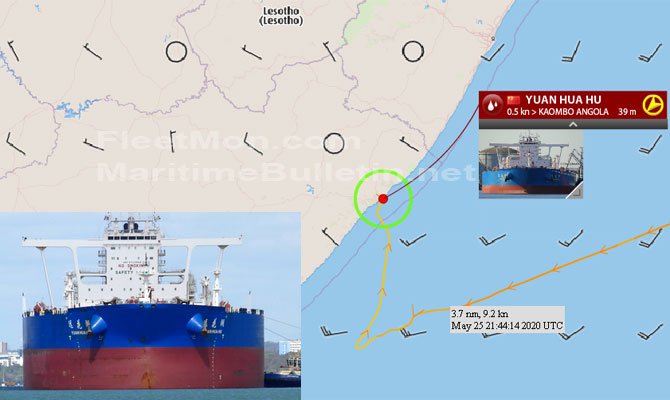