On May 22 14 Tunisian migrants on board of passenger ferry MOBY ZAZA, serving as migrants quarantine ship at Porto Empedocle, Sicily, rioted, and demanded immediate landing. Their demand was satisfied, all were taken ashore to a “reception center”, so the only question still unanswered is the question of Italian authorities – did they plea for forgiveness, for being as cruel as that, and confine illegal migrants on board of a luxury Mediterranean passenger ferry? Earlier this week, one Tunisian migrant fell overboard from MOBY ZAZA and drowned, switching all related NGOs and media into a “righteous rage” mode. The cost of keeping illegal migrants on board of MOBY ZAZA is some 4,000 Eu/month/per-migrant, and there already some 250 of them on board of unfortunate ferry.
All mainstream media are presently, full of pathetic stories of cruise and merchant ships crews, being stuck on ships and having no perspective or hope, of leaving them soon. Crews are going on strike, protesting, demanding – no result except articles in media, published mainly as some juicy pieces, to enliven lockdowns dull, grey and desperate insanity, and entertain locked in, deprived of job and income, people.
They say we have to brace ourselves for a “new reality”, because life will never be the same. Why? It’s already back to normal, if we look at illegal migration. It’s gathering way, rejecting the “pandemic new reality” and all its’ “new normal” idiocies. Illegal migrants (criminals, according to not yet revoked laws) seem to be totally immune to “pandemic”, which is nothing short of a miracle. The same can be said about convicts, released from prisons. They’re also, immune.
The worst fate to befall a common hard-working, honest man, is just that – to be a common hard-working, honest man/seaman.
Everything is fine with fighting Climate Change, also, and Climate Change Industry Complex is speeding up on the way to total recovery, no “new normal” excuses, let alone facts, accepted. Tens of millions of dollars are already poured into new “zero-emission shipping” projects (scams, that is), during recent weeks, in the midst of so-called “pandemic”. Why not channel these huge funds into chartering planes, to change and relieve crews? Why waste them on GHG cuts, in times when GHG emissions are on sharp decline?
Ah yes, I forgot. There was a very honorable act, initiated by ICS/ITF and the rest of so-called “maritime organizations” – there was a worldwide honking, to recognize and honor seamen hardships, in the midst of the “pandemic”.
If there was any solidarity in global shipping community (there’s none, regretfully), I’d propose a return gesture of gratitude, addressed to all “maritime organizations” starting with IMO. I’d advise to conduct a worldwide fart flash mob, to recognize “maritime organizations” and “industry media” efforts in helping out the crews. All who join are to go out to upper deck and give a hearty, mighty and as smelly, as possible, fart, thus expressing their gratitude to shipping “elites”.
Passenger ro-ro ship MOBY ZAZA, IMO 8020642, GT 22161, built 1982, flag Italy. 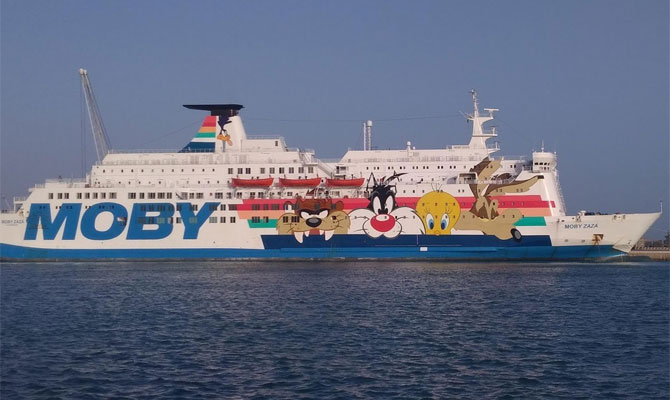