Hapless container ship LEXA MAERSK is to arrive at Rotterdam on May 18, to be berthed at APM Terminal Rotterdam and treated for virus infected crew – well, probably infected. LEXA MAERSK interrupted her voyage to medevac one crew, who was taken to hospital at Charlotte Amalie, US Virgin Islands, see previous news below. Now MAERSK, reportedly, asked APMTR to allow vessel to dock, with 6 other crew, including Captain, being probably, virus infected. Ship’s AIS missing since May 12, last position dated evening May 12, SW of Azores, heading for Northern Europe, port of destination not declared.
Why such secrecy? And what else do we expect from crews, except becoming vulnerable to flu/cold infections, after months of lockdowns, without shore leaves or simply walks on land? These lockdowns and shore leave bans ruin the health and immune system of sailors, it’s as simple as that. Who’s to blame for this worldwide crime against humanity? Why, usual suspects, of course. UN and all its’ branches, including IMO/ILO, all international organizations, media and colluding with the UN/WHO deranged, openly criminal “nation leaders”, politicians, governments, so-called “scientists” and so-called “medics”.
Talking about public health – in Russia Putin ordered prolongation of lockdown for all people of 65+ age, banning them from walks, from fresh air, from sun, or in other words, dooming them to premature deaths. In the name of public health and safety, of course. Kremlin decided to get rid of elderly people, they cost too much, you see. Why not kill them by mass shootings or in gas chambers? I’m sure these options are under consideration. With so many scared to insanity idiots, believing in “deadly pandemic” and Climate Change global catastrophe, it won’t be a big deal.

Container ship LEXA MAERSK interrupted voyage to medevac crew, probable quarantine
May 8, 2020
Maritime Bulletin was informed, that container ship LEXA MAERSK had to interrupt her voyage and call Charlotte Amalie, US Virgin Islands, to medevac an ill seaman, understood with fever symptoms. The ship left Colon Panama on May 1, bound for Tangier Morocco. Reportedly, on May 6 she was diverted to take part in SAR of a man overboard from another vessel. On May 7 the ship suspended search and headed for Charlotte Amalie. She anchored off port on May 8, and as of 1300 UTC May 8, remained at anchor. Seaman has been already taken to hospital. Quarantine was mentioned, depending on ill seaman coronavirus test result.
Container ship LEXA MAERSK, IMO 9190767, dwt 63400, capacity 4500 TEU, built 2001, flag Denmark. 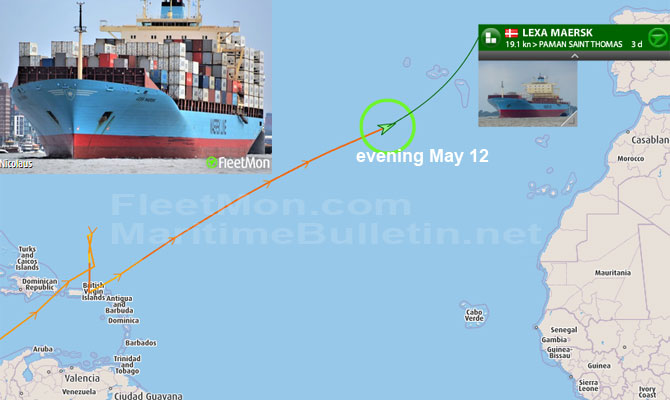