We’re in the midst of a World Insanity Competition among governments, some ironic substitute of Olympic Games. Hordes of bureaucrats throughout the world are fiercely competing each other, trying to invent and impose on their nations new restrictions, new prohibitions, new total bans, called to fight off this horrendous mighty virus. Most ridiculous and insane ideas are becoming strict laws, violators are arrested, fined, imprisoned. Greece CG regulated sea bathing – one can’t take a swim in sea, unless he’s prescribed by doctor to do so, and has respective official document. A man in Moscow arrested for taking a walk in void of any human being (except probably, criminals) big park. A whole forest in central Russia – wild forest – is closed for entry for any person, except authorized persons with special pass IDs. There are thousands upon thousands of similar stories throughout the world. It is an insanity. But for governments and bureaucrats, it’s a feast. “Prohibit, restrict, check and control” – it’s the name of their most favourite game.
Nowadays, one must be real cautious coming up with new ideas on boosting crews safety and security – if he indeed, cares for seamen, and if he fully comprehends possible implications. News ideas are pouring in, no problem with that. Here’s one:
More than 4,700 people have signed a petition on change.org demanding a zero contact policy in ports around the world. The campaign was started by Mukta Kumar, the wife of a seafarer and keen Splash reader. https://splash247.com/worried-wife-of-a-seafarer-launches-campaign-to-ensure-zero-contact-in-ports-during-coronavirus-crisis/
What’s the actual meaning and result of this bright idea? The crews, be this idea spotted by bureaucrats and developed into regulation, will be locked on board, for the whole duration of their contracts. The ships, de-facto, will transform into floating high-security prisons. I don’t even want to talk about real and fake dangers of coronavirus, suffice to say, that be it a bit as deadly as we’re told, oceans and seas would be full of ghost ships with dead or dying crews. Nothing like this happened, and won’t happen, unless our dear “scientists” will create and unleash such virus. This one failed, obviously.
But one may say, that this is a temporary measure, to be called off after pandemic is over. Really? Nothing is more permanent, than temporary governmental restrictive measures. Listen to what they all say, 24/7, all mainstream and politicians, celebrities and so-called scientists, journalists and experts, and finally, Bill Gates The Almighty Virus Himself. They’re saying to us, that the insanity we have now, is “a new normal”. There’s no such thing as “new normal”, by the way. Life is either normal, or insane. We’re either free, or enslaved and locked down, whatever the pretext may be. Anyway, that’s what they say day and night, that’s the new GULAG reality they’re pushing us into. So, I for one, wouldn’t be so optimistic about any restrictive “temporary measure”, and the ease with which presumably, it may be called off.
Zero contact policy will immediately bring up a whole bunch of problems and complications, some of them being very dangerous for the safety and well-being of the crews. For example – in case of an accident or emergency, demanding soonest possible response, this “zero contact” idiocy may delay and hamper badly needed assistance.
But after all, just imagine yourself being a young man, signing up as a seamen and finding yourself in a prison. Young people are motivated to go to sea, among other things, by a desire to travel around, see exotic places and explore new lands. Much they’ll see, being locked!
This woman’s dangerous idea has already found support:
Commenting on the campaign, David Hammond, founder of the charity Human Rights at Sea, told Splash today: “Families are increasingly and rightly becoming vocal about the necessary safeguarding of their spouses from Covid-19 onboard ships, including access to individual protection measures. Fortunately, today’s online platforms now allow for such concerns to be publicly raised by the ordinary person, and not dampened down, or dismissed behind corporate veils.” https://splash247.com/worried-wife-of-a-seafarer-launches-campaign-to-ensure-zero-contact-in-ports-during-coronavirus-crisis/
Nothing can be more further from the reality. Majors love restrictions and zero-policies. Adore them. Why? Because each new restriction and zero-whatever makes them less responsible. Whatever happened under whatever circumstances, seaman is to blame. He was warned, banned, restricted. He violated the rules and the orders, so he’s to blame and bear all consequences.
With so many restrictions, bans and lockdowns around and still coming, Charity Human Rights at Sea may soon re-brand itself into Slaves Rights at Sea, it will be more consistent with truth and reality.
As for this woman, author of the idea of transforming ships into prisons, I don’t have enough hypocrisy to say, that I understand her concerns and fears. No, I don’t understand. We’re responsible for what we say, do and propose, especially when our ideas may impact and harm others, in a big way. 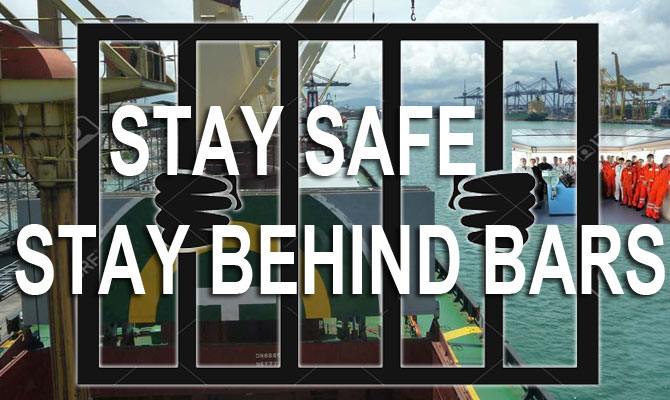