New twists in “fighting coronavirus” idiocy – Master of Marshall Islands flagged bulk carrier refused to commence offloading on Chittagong Anchorage, fearing local dockers will infect his crew. He demanded a floating crane to handle his ship, but there’s no floating crane available for cargo operations in Chittagong. Master, understood of Indian nationality, already complained to Indian authorities, to Flag State Administration, to some human rights watch organizations in London and of course, to Indian seamen union.
In Australia dockers refused to offload the ship with vitally important import goods, fearing virus (though probably, not so much dockers, as Australian Trade Union). Same stories reported by other countries throughout the world. Now crew decided to join the fun and refuse to allow port workers. Just one crew, as of now. But the whole coronavirus story demonstrates, how viral it is – not virus, but panic, fear and cowardice. The least dangerous thing in global panic pandemic is the virus itself, if we’re to listen to growing number of medics, scientists and experts, who raise their voices against paranoia and global lockdowns.
Here’s my message to all those who lost whatever personality, common sense and courage they had prior to “virus pandemic”. You – all of you – have nothing to fear from virus, you’ll fool it, by dying in dire misery, from hunger and thirst, from uncontrolled violence and crime, from lack of everything vitally important, be it electricity or medical/hygienic goods, long before virus will have a chance to hit you. Your very unpleasant death seems to be guaranteed by the extreme stupidity of your behaviour and response to this hyped threat. One month of lockdown/quarantine insanity, two months at most, and social and economical infrastructure will collapse, burying us all beneath its’ debris.
But you’ll die with happy smile on your lips – after all, in the long run, you cheated the damn virus, right? Idiots!
April 4, 2020

Follow this link https://zen.yandex.ru/media/smotrivsebja/doktor-medicinskii-nauk-igor-gundarov-my-stolknulis-s-totalnoi-pandemiei-straha-5e862a218b13cf0c2d5b5197 it’s an interview, given by one of most prominent Russian virologists, Dr. of medics, professor, academician Igor Gundarov. It’s in written form, not audio. Paste it to google translator, it’s not large. Use key words and search for other experts analysis in other languages, and you’ll find many of similar opinions given by no less prominent medics and scientists, in many countries and languages. Their message is loud and clear – STOP this madness. Stop this insane “fighting pandemic” campaign.
Now, try to find people you know and you lost because of virus, people who died after being infected, people whom you know personally, or your friends know, or friends of your friends or relatives of relatives of friends, or somebody who knows somebody who lost somebody. You’ll find it quite a quest. But you’ll have no problem and waste no time in finding tens of millions of people, who already suffer, who lost their jobs and savings, who’re locked in their houses, not knowing what to do and how to survive, who’re already desperate to such an extent, that they don’t care anymore about coronavirus or any other virus, or Black Death itself, should it return. What is the name of the disaster which hit them so hard? Coronavirus? No, it’s prevention of coronavirus, it’s a pandemic of fear and insanity, that’s the name of the disease they fell victim to.
Why do you think China suspended all its’ lockdowns and quarantines so abruptly, being in the epicenter of an outbreak, if there was one? It’s because China approached the deadline, the point of no return – either suspension of all “preventive measures”, or total economical, infrastructural and social collapse. The same will happen in Europe, in the US and in any other country, foolish enough to follow “total lockdown” policy.
People who attack me and others like me, are already zombies, infected not with omnipresent virus, but with fear. They’re begging the authorities to take away their freedoms, forgetting one simple truth which proved itself time and again throughout all humankind history – you give up your freedom in exchange for safety and security, you won’t get either of them. You’ll get misery and mass extinction.
Such people, such zombies, will wake up to harsh realities, only and when they’ll find themselves desperate, when they’ll be hit real hard by the consequences of “pandemic prevention”. Misery and starvation are best teachers.
As for my very poor, disgusting English, here’s my observation on it, something I noticed long time ago, and find very amusing – if somebody disagrees with my thoughts and ideas, to the point of being infuriated (you may take not all that wild guess in assuming, that it happens quite often, with my nasty habit of writing what I think and not giving a damn about mainstream), he immediately attacks my English. Yes I know my eng skills are way too far from being perfect, but with that, my English is quite understandable, or else you won’t get so angry. To round it all, I personally, prefer poor English plus brains and knowledge, to perfect English minus brains and any knowledge whatsoever.
The pic illustrating my article wasn’t correct, find bellow correct one. Many thanks to all those who remain in sound mind, amid global madness.
Voytenko Mikhail
Apr 6 2020 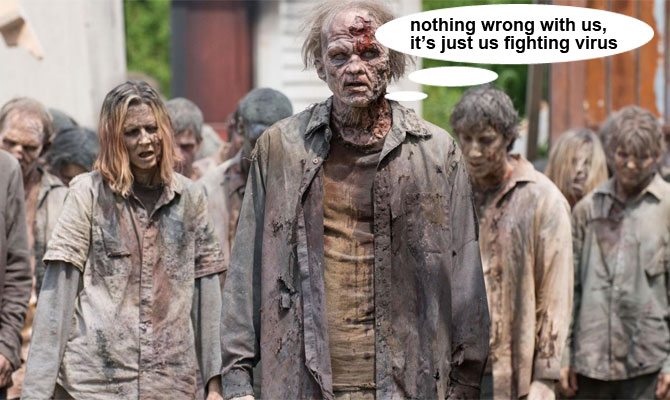 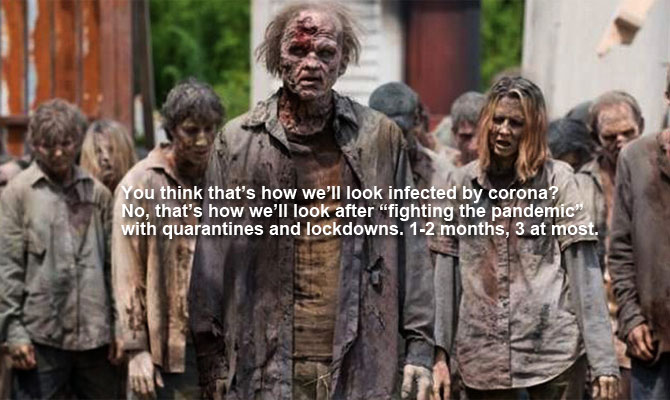