UPDATE: Confirmed it’s MSC TALIA F, 7 crew reportedly kidnapped out of total 17, all said to be Ukrainians. The ship resumed sailing at around 1115 UTC, AIS on, as of 1415 UTC she was approaching Libreville.
1030 UTC: Cargo ship attacked in Gulf of Guinea halfway between Sao Tome and Libreville Gabon, at around 0730 UTC Mar 22. The ship is not identified, but according to ships’ tracks, it’s almost undoubtedly, container ship MSC TALIA F, en route from Lome to Libreville. As of 0900 UTC, ship’s AIS was off during last 3 hours.
Container ship MSC TALIA F, IMO 9308601, dwt 11815, capacity 957 TEU, built 2005, flag Portugal, manager MSC.

Cargo ship attacked in Gulf of Guinea in the morning Mar 22 while under way, the ship wasn’t identified. According to ships’ tracks in the area, it is most probably, a container ship. As of 0900 UTC, ship’s AIS was off during last 3 hours. Awaiting ship’s ID confirmation and more info.
Details for subscribers only.
For annual subscription, contact [email protected] 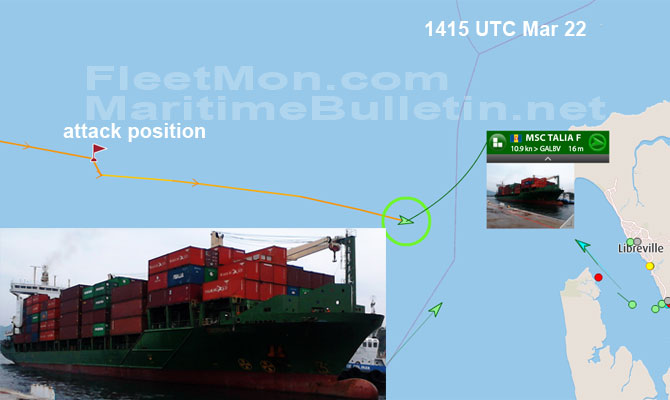