I compiled something of a summary of cruise ships distressed or troubled by coronavirus paranoia and fears. The overwhelming majority of the ships and people on board are corona clean, they fell victims to inflated, not justified, fears, not to infamous virus. The list contains brief information on 17 troubled ships, it’s not full of course, there are more ships still cruising around, turned away by a number of countries, and not knowing where to dock.
Thousand of people are trapped on board, unsure of their fate. It’s not a fight with coronavirus, it’s our shame and disgrace. I don’t know how dangerous coronavirus is, but I know, that the actions governments are taking to contain it, and all the fears hyped around it, are much more dangerous and ruinous, already.
Will do my best to update this list and monitor the situation.
Voytenko Mikhail
Mar 19 2020

Mar 22 UPDATES:
MSC FANTASIA docked at Lisbon Portugal, all 1338 to land in Lisbon, no problems so far except cancelled cruise.
COSTA LUMINOSA at Savona, ordered to leave in the morning Mar 23, with at least 200 passengers and 800 crew on board – they’ll stay locked on board until Italy starts to cancel quarantines and lockdowns.

1 BRAEMAR (IMO 9000699, on board 682 passengers, crew 371) HAPPY END, thank you Cuba!
Refused entry by several Caribbean nations, heading for Cuba, which agrees to allow the ship to entry Cuban port, with following passengers disembarkation. Mar 18: Ship’s at Mariel Cuba, looking like she’s berthed.
Mar 20: All passengers disembarked at Mariel, Cuba, and understood, are already in the air flying home. Thank you, Cuba!

4 SILVER SHADOW (IMO 9192167, on board 316 passengers, 291 crew)
Berthed at Recife, Brazil, 1 passenger infected, all people on board to disembark starting Mar 17, all to be taken to their countries of origin by planes to be provided by these countries; operator of the ship is to take care of the ship or pay for maintenance while at port.

6 NORWEGIAN JEWEL (IMO 9304045, on board 2000 passengers, 1000+ crew)
Stranded in South Pacific, refused entry by 4 countries, on Mar 17 managed to refuel at Samoa, steaming full speed to Honolulu Hawaii, where allegedly, passengers will be allowed to disembark, ETA Mar 22.
Mar 20 UPDATE: State and cruise line officials previously said passengers would disembark at Honolulu Harbor. However, State Department of Transportation decided to only allow the Maasdam and Norwegian Jewel cruise vessels … to come into port solely to take on fuel and resupply, in Honolulu Harbor.

7 PACIFIC PRINCESS (IMO 9187887, capacity 670, crew 370)
Has been refused entry by Singapore, Thailand, Indonesia and Sri Lanka, headed for Fremantle Australia, ETA Mar 20. Understood she passengers will be allowed to disembark, because by Mar 19 she will be 14 days at sea, required time of being under quarantine.

8 AIDAmira (IMO 9172777, on board 1240 passengers, crew 486)
Berthed in Cape Town since Mar 16, under quarantine, 6 passengers who’s been on the same flight with 1 corona infected person are in hospital undergoing test.
Mar 20: Cleared after virus check, passengers will be allowed to disembark and fly home.

9 MSC MUSICA (IMO 9320087, on board 2900 people)
Allowed to berth at Buenos Aires, all on board are undergoing health screening, hopefully passengers will be allowed to disembark, because the majority of them are Argentinians.

10 CORAL PRINCESS (IMO 9229659, capacity 1970, crew 900)
Arrived at Rio Del La Plata and was anchored off Montevideo, Uruguay, on Mar 17. The ship arrived from Ushuaia Argentina, she was to dock at Buenos Aires, but understood, banned. No clarity yet.

11 COSTA FAVOLOSA (IMO 9479852, on board were 2204 passengers, crew 1110)
Stranded off Guadeloupe, Caribbean, and it looks like authorities found a way of repatriating passengers without quarantine – they leave island by chartered planes, in groups. After disembarking each group, the ship leaves Port de Pointe-a-Pitre and cruises off port until everything is ready to disembark next group. She’s to dock port again on Mar 18, with remaining 400 passengers, to be deported as soon as planes will be chartered, according to local sources.

13 MAASDAM (IMO 8919257, capacity 1258, crew 580)
ETA Honolulu Hawaii Mar 20, all on board to undergo health check prior to disembarkation.
Mar 20 UPDATE: State and cruise line officials previously said passengers would disembark at Honolulu Harbor. However, State Department of Transportation decided to only allow the Maasdam and Norwegian Jewel cruise vessels … to come into port solely to take on fuel and resupply, in Honolulu Harbor.

16 COSTA LUMINOSA (IMO 9398905, on board more than 1400 people)
Approaching Marseilles with several corona infected (confirmed or suspect, unknown) people on board, ETA Mar 19, highly probably to be banned from entry.
187 French passengers were disembarked, the ship was to sail to Italy, however, thanks to diplomatic intervention, 296 passengers, mainly Austrians and Germans, managed to land on Mar 20. The ship is to sail to Italy, port of destination yet not nominated.
Mar 22: The ship berthed at Savona Italy on Mar 21, ordered to leave on Mat 23, next port being probably, Genoa. Disembarking under way, understood majority of passengers will managed to land, some 800 crew and 200 passengers will stay on board, because they can’t fly from Italy, anyway, as long as all flights to their native countries are banned.

17 COSTA PACIFICA (IMO 9378498, capacity 3780 passengers, crew 1100)
Arrived at Marseilles on Mar 19, after disembarking 145 French passengers, was kicked out by French Authorities, under way to Genoa Italy, ETA Mar 21.
French Authorities together with their gender neutral and very politically correct President, are disgusting.

18 COLUMBUS (IMO 8611398, capacity 1800, crew 700)
Refused entry by a number of Indonesian ports, reached Phuket island, Thailand, Andaman sea, in the morning Mar 18, anchored. No news at all, except that 1 passenger was treated for possible corona infection in Indonesia.
Mar 20: Cruise & Maritime Voyages (CMV) has confirmed that two of its cruise ships have rendezvoused 12 nautical miles off the coast of Phuket, Thailand, and undertook a unique passenger transfer during Mar 18. COLUMBUS is now undertaking a 7,842 nautical mile voyage directly back to the UK with 907 passengers including 602 British nationals and 619 crew members on board.
VASCO DA GAMA will undertake a 2,837 nautical mile voyage directly back to Australia with 952 passengers including 907 Australian & New Zealander nationals and 552 crew members onboard arriving back in Fremantle (Perth) on 27 March.
Thumbs up to Cruise & Maritime Voyages – they found quite an unusual and daring solution to frustratingly difficult problem.

19 COSTA VICTORIA (IMO 9109031, on board 700 passengers, crew 770)
En route to Venice Italy ETA Mar 28, from Oman. The ship has been planned to be relocated to Mediterranean after seasonal deployment in Indian ocean. No decision yet on her fate and passengers disembarkation. The ship is reportedly, clean, but raging virus paranoia doesn’t take such nuisances into account. She’s to be quarantined, though she’s been at sea for more than 2 weeks. She transited Suez (without calling Canal ports) on Mar 19, and as of morning Mar 20, was sailing in Med at a reduced speed, heading for Venice.

20 MSC FANTASIA (IMO 9359791, on board 1338 passengers, crew 1310)
Sailed from Rio de Janeiro on Mar 9 to Europe, all European calls were cancelled, docked at Lisbon Portugal on Mar 22, all passengers are to disembark in Lisbon after health check, and fly home. 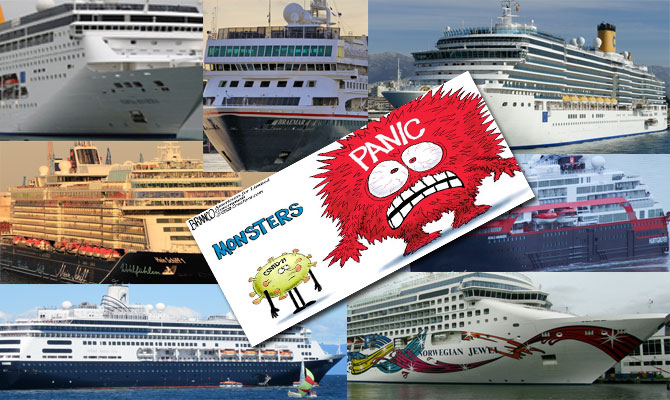