Mar 2 UPDATE: Tanker remains at anchor in designated safe zone, though works to fix faulty flange, carried out during Feb 11 – Feb 23, were partial success, tanker was yet considered to be to dangerous to berth and offload her cargo. Cargo of liquid propylene was offloaded to a barge in STS operation, which lasted from Feb 29 until Mar 1. Understood cargo was offloaded from a tank with faulty flange.

Feb 13:
LPG tanker GAS PRODIGY loaded with 2,400 tons of liquid propylene arrived at Fuzhou Chemical Terminal, Fujian Province, China, on Feb 10, from Philippines. During offload preparations leak was found in a flange of a pump of Tank No.1, and a leak of propylene gas. Tanker was taken to outer anchorage, safety zone around the ship was established. Propylene mixture with air is highly inflammable, so there’s risk of fire and explosion. Technical team boarded tanker in the evening Feb 12 to fix the problem, on Feb 13 reportedly, repairs still under way.
LPG tanker GAS PRODIGY, IMO 9263966, GT 4508, built 2003, flag Liberia, manager BRAVE MARITIME CORP INC, Greece (EQUASIS). 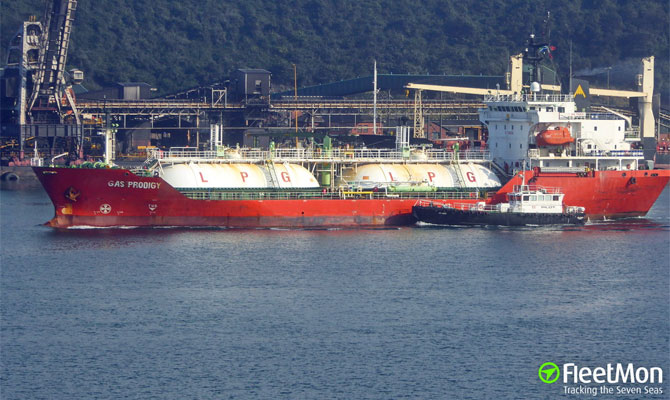