The Libyan National Army (LNA) made an official statement on Feb 17, claiming that its forces had destroyed a Turkish cargo ship, berthed at Tripoli, Libya. The ship brought to Tripoli arms and ammunition, says LNA. Turkey already denied this claim, saying that there’s no Turkish ship at Tripoli.
Comment: Turkey statement is incorrect, there’s a Turkish ship at Tripoli, it’s a bulk carrier AYLA, she arrived at Tripoli on Feb 15 from Istanbul. But she’s far from being hit or destroyed, judging from her most recent looks. Her AIS is on, and no other ship in port looks like hit by missile or shell. Reportedly, port was either shelled or hit with missile, resulting in one warehouse fire and a lot of billowing black smoke. As for LNA claim on sinking Turkish ship, such a bold statement is not surprising for those who have to monitor Libyan maritime news and information. LNA claims and statements, at least with regards to shipping and ships, weren’t, kind of, exactly true, so far.
Bulk carrier AYLA, IMO 9123960, dwt 27837, built 1995, flag Cook Islands, manager TOLUNAY SHIP MANAGEMENT, Turkey. 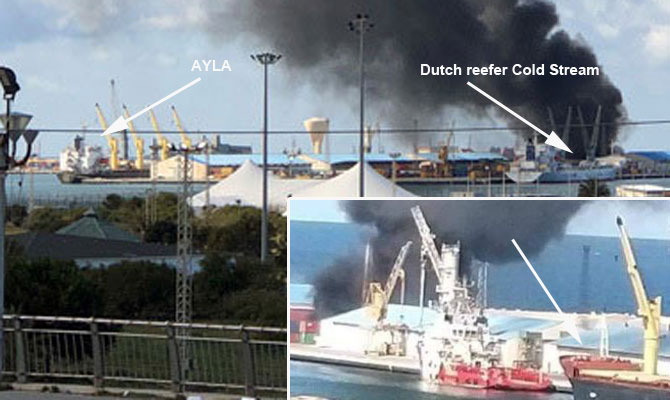