Feb 16 UPDATE 1: According to latest official information, no less than 100 kilos of cocaine were found. All 24 crew are under arrest. 3 arrested accomplices, who were to take cocaine from ship and deliver to Copenhagen, include 1 Russian and 2 Latvian nationalities.

Feb 16 UPDATE: 310 kilos of cocaine were seized. The ship was brought to Kalundborg, berthed, crew understood to be under investigation. It is not known, how many of the crew were involved in trafficking, though there’s no doubt, that a number of crew had to be involved, including officers. The ship can’t slow down at night in a lane with dense traffic in order to transfer drug shipment to a boat, without involving some essential crew, not to mention rendezvous with this boat, which had to be plotted long before the ship reaches Danish waters.

Danish police on Feb 15 busted a large-scale drug contraband operation and traffickers ring, including it seems, the crew of reefer DUNCAN ISLAND. Police were alerted about coming drug shipment for quite some time, it was in fact, an international operation. Reefer sailed from Ecuador on Jan 27, on Feb 14 she called Helsingborg Sweden on Feb 14, left Swedish port early Feb 15, bound for S-Petersburg Russia, and was intercepted off Langeland, Denmark, at the time of transferring drugs to a small boat. Three persons who were to pick up shipment from the ship were arrested, the ship was ordered to sail to unnamed port, where all the crew are to be arrested and interrogated. Some details aren’t revealed, including drug type and quantity, it was only said, that “this is indeed, very big bust”.
Reefer DUNCAN ISLAND, IMO 9059638, dwt 14140, built 1993, flag Bahamas, manager? 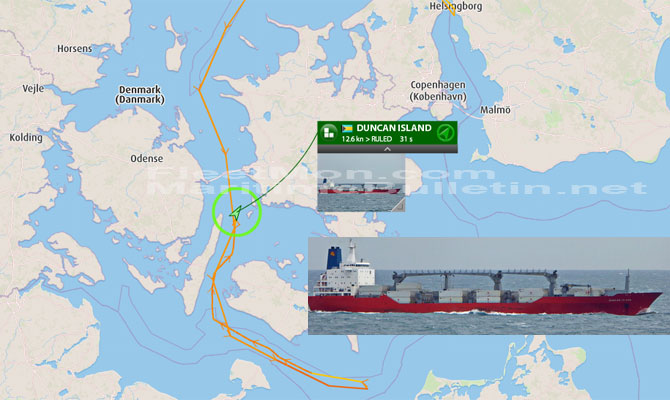