Master of bulk carrier RISING WIND was reported missing on Feb 11, somewhere in 10 50N 148 09E area, if analyzing ship’s search track. MRCC Australia alerted JRSC Guam, a large-scale SAR was launched, with deployment of planes. The ship turned back and started moving along her initial track at around 0230 UTC Feb 12, until 2300 UTC, and after that, it seems, it was decided to move in legs, see screenshot of her track. The ship is en route from Japan to Australia, at the time of the alert she was some 400 nm SE of Guam. According to Chief Officer report, received by MRCC Australia, 47-year old Master was last seen in his cabin, feeling ill.
Bulk carrier RISING WIND, IMO 9582984, dwt 82151, built 2014, flag Panama, manager NS UNITED KAIUN KAISHA LTD, Japan. 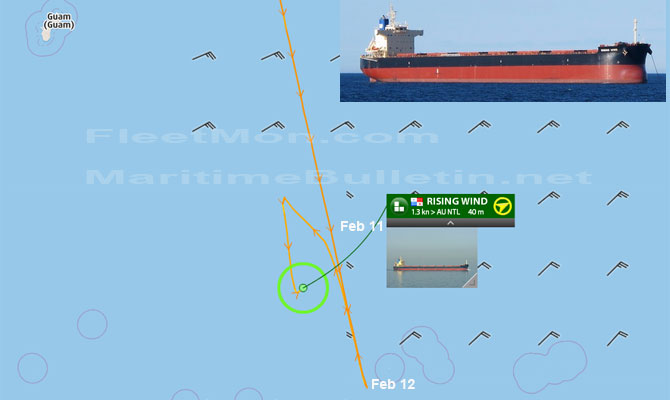