Suezmax crude oil tanker ASTRO PERSEUS reported aground since 0800 UTC Feb 9 at Port Said entrance, looking like she strayed off fairway prior to grounding, probably because of some steering/engine failure. Several tugs were trying to refloat laden tanker during the day Feb 9, but all attempts failed, salvage suspended at night until daytime Feb 10.
Tanker is en route from Ust-Luga Russia to China, i.e. she’s loaded with crude oil.

Feb 10 0915 UTC UPDATE: Tanker still aground, with at least 4 tugs deployed in refloating.

Feb 10 1540 UTC UPDATE: Was refloated at around 1430 UTC, as of 1540 UTC slowly moving to deeper waters, either moved by tugs or under own power escorted by tugs. No doubt she’s to be anchored and surveyed, most probably by divers. 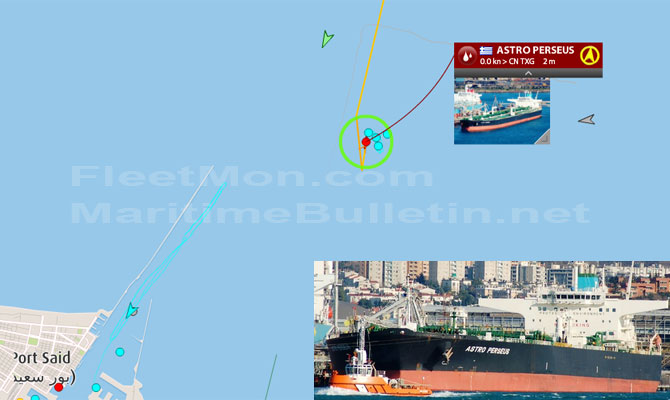