Feb 4 CORRECTION: Manager company sent to MB its’ official Statement detailing container ship CERES accident, which took place during Kiel Canal transit:
The container vessel Ceres did not suffer from a sudden engine failure when transiting the Kiel Canal earlier this week. Following high temperatures of the shaft generator the ship made a controlled stop under full supervision of the master and pilots and did not run into the embankment. Ceres was kept in its waiting position during repairs by use of the bow thruster and proceeded its voyage after completion.

Container ship CERES suffered engine failure while transiting Kiel Canal in the afternoon Feb 2, and ran onto embankment. Was refloated in about an hour and a half by tug, resumed transit, seemingly under own power, but escorted and assisted by tug. According to track, the ship is experiencing steering problem. As of 1830 UTC Feb 2, was approaching Kiel. She’s en route from Hamburg to Kaliningrad Russia, Baltic sea.
Container ship CERES, IMO 9429211, dwt 12254, capacity 877 TEU, built 2010, flag Antigua, manager LEONHARDT & BLUMBERG SHIPMGMT. 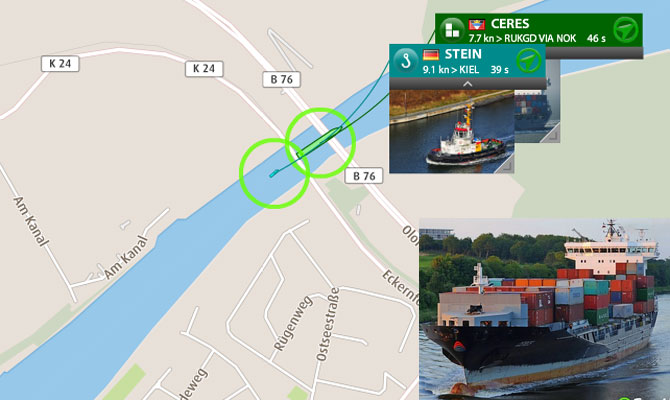