Free Trade Agreement between Thailand and Bangladesh is agreed in principle, by both side, during the 5th Joint Trade Committee (JTC) meeting between the two nations on Jan 8 2020 in Bangkok. Thailand is ready for Free Trade Agreement talks and required for FTA joint study on its’ feasibility.
Bangladesh is Thailand’s third-largest trade partner in South Asia after India and Pakistan, with annual bilateral trade worth $1.25 billion in 2018, down 4.4% from the previous year.
So far, Thailand is having a significant trade surplus, with exports to Bangladesh amounting to $1.2 billion and imports worth just $59.24 million.
Thailand exports from Bangladesh cement, plastic pellets, chemical products, textiles, steel, tapioca products, air conditioners, cosmetics, and automobiles and parts; importing a small amount of garments, scientific and medical gear, fresh and frozen aquatic animals, and machinery and parts.
Thailand’s direct investment in Bangladesh totalled $1.5 billion from 2006 to 2019, mainly in agriculture and processed agricultural industries, construction, and hotels and related services, while Bangladesh’s investment in Thailand was worth $1.12 million during the period.

All import/export goods are transported to/from Bangkok and Laem Chabang ports, via transit ports in Malaysia, mainly Port Klang, and Singapore, delivery time being some 7-12 days.
There is an alternative route, which excludes transit ports and transshipments, project being mulled over for quite some time. It’s a direct route between Chittagong Port and Thailand’s Port of Ranong in Andaman sea. Delivery time will be shortened to some 5 days. This project was also discussed during 5th Joint Trade Committee (JTC) meeting, and both sides agreed it has to be expedited.

This route of course, requires a feasibility study, and hopefully, it will take into consideration a very interesting option, which will undoubtedly, make route more viable, and more than that – it may attract shippers from other countries in the region, such as Vietnam or Philippines, or Cambodia. As long as the ship or ships, deployed on this route, will be calling just two ports, Chittagong and Ranong, this ships or these ships can be operated using conventional heavy fuel oil, which is much cheaper than low-sulphur fuel, or other alternatives, like scrubber, LNG, etc. All both countries should do is to include this option in route agreement, and there are no other parties or laws which may prevent it.
Of course transit cargo flows will require expansion of land bridge between Ranong port and ports of Gulf of Siam, and quite a number of other routes, already existing or projected, first of all routes, included into EASTERN ECONOMIC CORRIDOR (EEC) Project.
Such bilateral or multirateral agreements may indeed, mitigate or neutralize IMO 2020 Cap economically destructive consequences, if applied in international shipping. 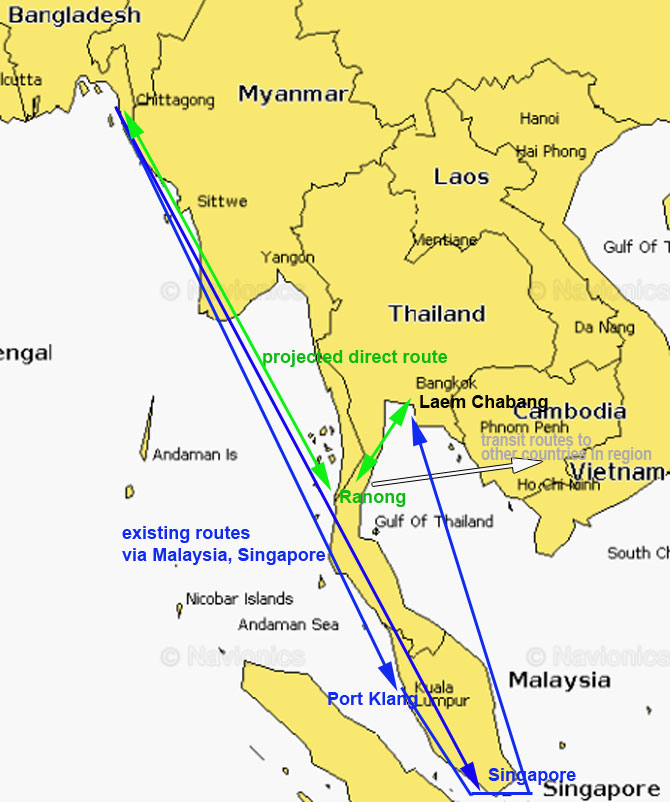