UPDATE: According to BOSKALIS information there was no accident on board of either PETROBRAS 70, or BOKA VANGUARD. Extra personnel were taken on board to carry out some works on a newbuild ship, 6 people fell ill, one fatally. I didn’t ask BOSKALIS when company called me on the phone, what illness they fell victim to, but in general it doesn’t look like some infectious disease, it looks more like food or beverage poisoning. – Voytenko Mikhail, 1830 UTC Jan 8.

BOSKALIS heavy lift ship BOKA VANGUARD interrupted her voyage from China to Brazil with offshore processing ship PETROBRAS 70 on board, and approached Durban South Africa, on Jan 7, requesting immediate medical assistance to 5 Brazilian seamen, understood of PETROBRAS 70 crew, who were injured in an accident, details of accident remain unknown. One more crew suffered fatal injures and died, his body remained on board of the ship. 5 injured crew, one in critical condition, were evacuated by South Africa Sea Rescue NSRI organizations and Air Force helicopters, operation was coordinated by MRCC South Africa.

Understood PETROBRAS 70 is a newbuild, in process of being transported from ship building yard in China, in Qingdao probably, to Rio de Janeiro. Ship’s AIS is faulty, occasionally positioning her in Europe.

Understood accident took place on board of PETROBRAS 70, not BOKA VANGUARD.
After medevac, BOKA VANGUARD resumed her voyage. 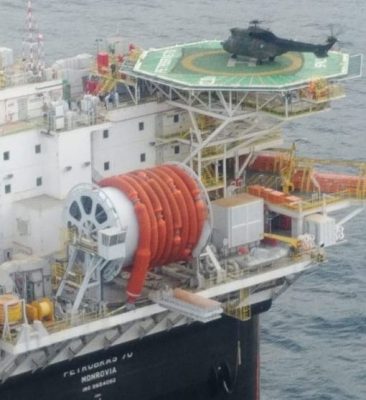