Arrival of reefer COTE D’IVORIAN STAR at Portsmouth UK from Dakar with cargo of fruits on Dec 30 was delayed for some 6 hours because of dead whale found on ship’s bulbous bow. Finally, the ship, which was already libeled by media as “monster” ship, was berthed in the evening Dec 30, to be unmoored next day, Dec 31. The ship was moved from berth to harbor, understood for carcass removal, and berthed back in the afternoon. The ship didn’t sustain any damages, except idiotic media coverage.
It is not even known if whale was killed by that monster, whale killer reefer, or was already dead by the time the ship hit it. But media are full of lamentations: “On further inspection the object was sadly identified as a deceased whale”…
There’s still a hope, that reefer/container shipping in English Channel won’t be banned, in order to provide whales safety, though there’s no doubt, that “environmentalists” and the likes will raise a hell, demanding immediate response in forms of navigational restrictions, heavy fines, extra levies, etc. It’s impossible to explain to them that global ban on whales hunt led to an upsurge in their population, hence collisions with the ships. But they won’t listen, they’re long and far beyond reasoning, they’re living in another dimension, in parallel universe.
Reefer container ship COTE D’IVORIAN STAR, IMO 9172478, dwt 15058, built 1998, flag Liberia, manager STAR REEFERS UK LTD. 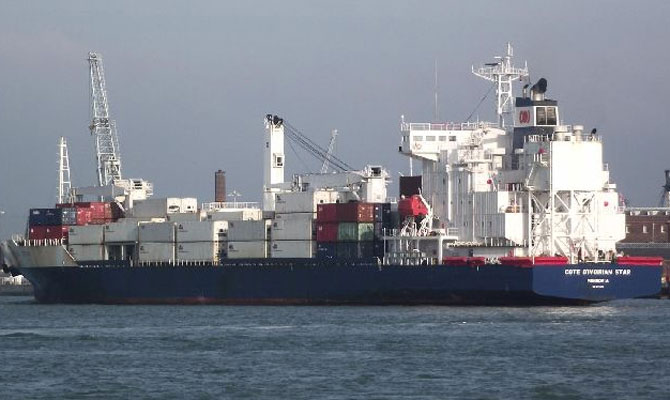