Aframax tanker and bulk carrier were attacked on Dec 23 while under way in Singapore Strait, puprpose of attacks unclear, because in both incidents crew on watch were tied up, but nothing was stolen.
South East Asia Piracy watch dog ReCAAP Report:
– On 23 Dec 19 at about 0012 hrs, tanker, BAMZI was underway in the Singapore Strait and en route from Nipa anchorage, Indonesia to Qing Dao, China when the chief engineer and duty engineer sighted three perpetrators in the engine room. One of the perpetrators was armed with a knife. The alarm was raised and the three perpetrators escaped immediately. Two motormen were later found tied up by the perpetrators.
A search on board the ship was conducted, with no further sighting of the perpetrators. The crew was safe, nothing was stolen and the ship resumed her voyage.
– On 23 Dec 19 at about 0154 hrs, bulk carrier, TRUST STAR was underway in the Singapore Strait when the crew spotted six perpetrators on board the ship and raised the alarm. Upon hearing the alarm, the six perpetrators escaped immediately. The perpetrators had confronted and tied up two crew in the engine room, who later managed to untie themselves. The master deviated from her voyage and sailed to the port of Singapore as he was not certain on the actual number of perpetrators on board.
Singapore Police Coast Guard boarded the ship and conducted a search on board. There was no further sighting of any perpetrator, the crew was safe and nothing was stolen.
Crude oil tanker BAMZI, IMO 9256468, dwt 104864, built 2003, flag Panama, manager OCM MARITIME EXPLORER LLC.
Bulk carrier TRUST STAR, IMO 9610236, dwt 36338, built 2012, flag Panama, manager NISSEN KAIUN CO LTD. 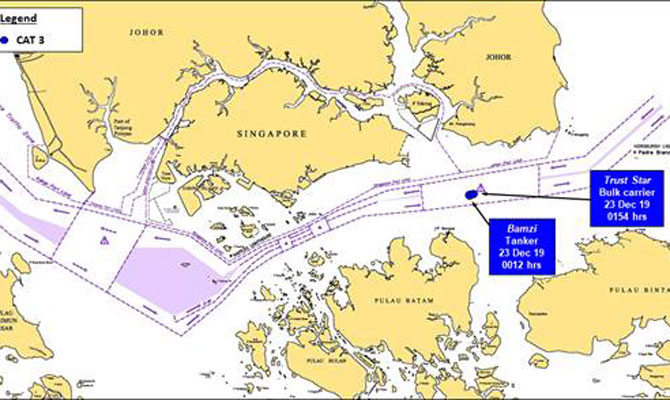