General cargo ship HAMADA S dragged anchor and drifted aground on a beach in Bizerte, Tunisia, in the morning Dec 11. The ship reportedly, arrived from Algeria some two weeks ago, to undergo repairs, but wasn’t allowed to pass Bizerte Canal because of safety considerations. Local media didn’t identify the ship, but her name is clearly visible on published video and pics. She looks like she’s to be scrapped, with dismantled cargo gear and general impression of neglected vessel.
HAMADA S last AIS signal was recorded about a month ago, in Tunisian waters, on arrival from Turkey. 10 crew remain on board and according to officials, cited by media, they aren’t authorized to land and must stay on board.
General cargo ship HAMADA S, IMO 7946643, dwt 3047, built 1977, flag Togo, manager SAYOSS SHIPPING LTD, Turkey. 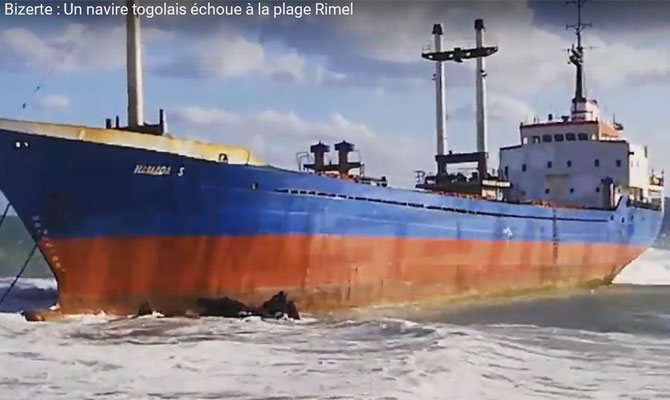