Ro-ro cargo ship EUROCARGO TRIESTE suffered fire in engine room soon after she left Livorno, Italy, at around 0130 UTC Nov 21. Engine room, according to reports, was sealed, fire fighting flooding system was activated. The ship was some 4 miles off Livorno, tugs took her back to port harbor, later she was moved out and kept outside port, with firefighting team or teams fighting fire or cooling hull, not clear. Latest AIS timed 1030 UTC, the ship was outside Livorno with tug and SAR boat at her side, condition unknown, fire status unknown, extent of damages unknown. 25 crew reported safe, no passengers on board, ship’s carrying some 200 or more vehicles. Understood fire extinguished, EUROCARGO TRIESTE anchored, firefighters checking the ship.

UPDATE: Fire was extinguished in the afternoon, one engine was on fire, later fire spread to generator. According to latest news, the ship was cleared to enter Livorno, and reportedly, as of 1700 UTC she was already berthed, though AIS is still off. 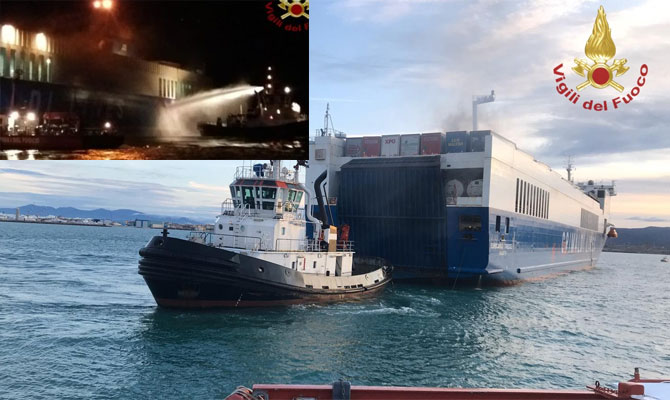