Product tanker PAXOI suffered engine failure in Gibraltar Strait shortly after leaving Algeciras with 3500 tons of oil products, bound for Tangier, Morocco, in the evening Nov 13, at around 1830 UTC, probably. Tanker reported to Salvamento Maritimo, salvage tug SAR MASTELERO (IMO 9525730) was sent to assist, PAXOI was taken on tow at around 2200 UTC, to be towed to Algeciras. According to track, tanker was under way until tug arrival. According to local sources citing officials, tanker was towed back to Algeciras and anchored, in the afternoon Nov 14. But according to track, tanker was towed further off to Alboran sea, then towage made a wide loop and started to move towards Algeciras. As of 0330 UTC Nov 15, caravan was still under way in Alboran sea E of Algeciras.
What’s all about, is anyone’s guess.
Product tanker PAXOI, IMO 9382190, dwt 6310, built 2009, flag Gibraltar, manager MM MARINE INC., Greece. 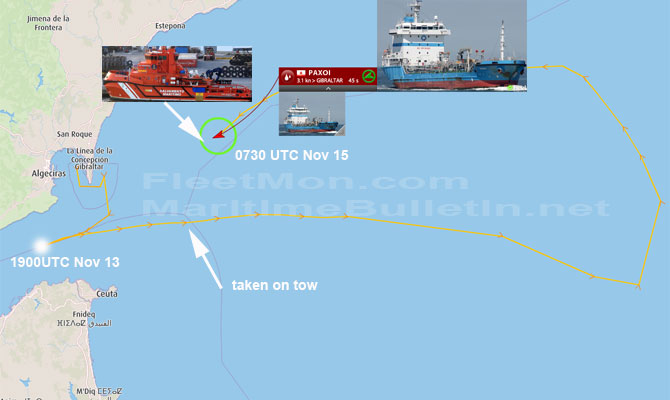