Oct 13: Here’s video of Iranian tanker SABITI, taken on Oct 12 or 13, in southern Red sea – tanker damaged by something, rockets or whatever, in starboard fore cargo tanks area (at least two holes can be clearly seen), leaking oil while she sails. As of 1400 UTC Oct 13, tanker stopped off Eritrea coast, Red sea, in anchorage area. General cargo ship SAVIZ (IMO 9167253) was spotted nearby, but she switched off her AIS as soon as she approached SABITI.
So tanker was in load and moving towards Suez, when she was attacked or whatever the hell it all was. SAVIZ is suspect, by the way, in trafficking arms to Yemeni Houthi militants, and according to Al Arabiya sources in Yemen, SAVIZ as of now, is full of arms and military equipment, plus her own 4 50-mm guns, surveillance equipment, special forces team and 3 RHIBs. Any ideas what’s all about? I ran out of all ideas, and frankly, don’t care any more, about this psycho stuff.
Previous: http://maritimebulletin.net/2019/10/11/iranian-suezmax-tanker-explosion-in-red-sea/ 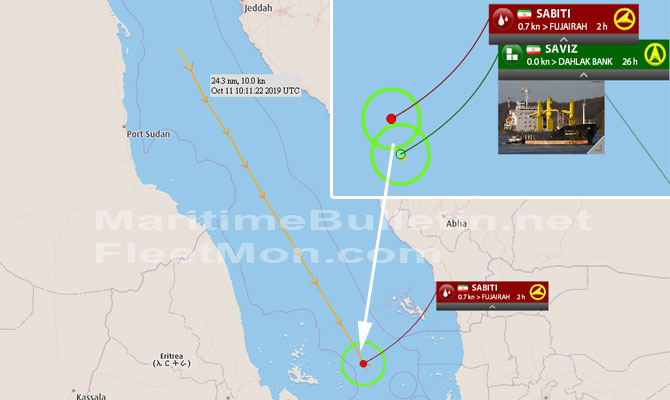