As of 1700 UTC Oct 11, tanker SABITI is steaming south in Red sea, destination unknown. Iranian officials insist SABITI was attacked and hit, by 2 rockets. But, added Iran, there was no fire, and there was no spill or it was taken under control, whatever. No ecological disaster, sorry, environment warriors. There wouldn’t be any disaster, even if there was some leak, but leak looks to be highly unlikely. The whole story is fishy, looking like it was staged. Now to facts:
How come Iranian media, not any other else, made accident (if there was accident) known? Tanker was presumably, attacked, in one of the most heavily trafficked sea lanes in the whole world, and nobody noticed anything? Firstly, Iranian media identified tanker as SINOPA. Tanker AIS was off for several months, and suddenly out of blue sky, it surfaced, starting Oct 8. But AIS went off again sometime around alleged attack. Then same Iranian media and this time, Iranian officials, said, that attacked tanker was similar to SINOPA tanker SABITI. In first wave of news leaked by Iran, explosion was followed by fire and oil leak. In second news wave, fire was absent, situation was under control, and Iran already knows, that there were two rockets and it was a terrorist attack. AIS of tanker SABITI is even more curious, than AIS of tanker SINOPA – it was also off during several months, but it was switched on shortly after alleged attack. By the way, if tanker original route was southbound, and that’s how it looks like, there couldn’t be any oil on board, tanker should be in ballast.
So, two ghost Iranian tankers were hiding for months with AIS switched off, and all of sudden, both reappeared in one place at one time. Rockets explosion turned on their AIS?
It’s just not serious, all the story, all of it. Details and facts don’t fit in.

0830 UTC Oct 11 UPDATE: As usual when something happens in Middle East waters, the story is changing with each passing hour. Now it’s probably SABITI tanker, suffering explosions and fire, but it may well be SINOPA, nevertheless. Now it’s rockets that hit tanker, maybe 2, maybe 5 of them. At least 2 cargo tanks are breached, according to latest.
According to AIS, SINOPA was hit, not SABITI. No AIS from SINOPA so far, while SABITI latest AIS timed 0800 UTC Oct 11, showed her under way heading south, speed 8.6 knots, not far from SINOPA.
The only sure thing in these waters, it seems, is the sun, rising east and going down west, the rest is always a guess. Maybe this or maybe that, maybe happened maybe not, maybe it’s just maybe or maybe it’s more or less probably.
SABITI (IMO 9172040, dwt 149999, built 1999, flag Iran, owner NITC) story is similar to that of SINOPA –,AIS history deleted, last port of call Evyap Turkey in April, resurfaced on Oct 11, near SINOPA. The ship probably (maybe) switched AIS on to smokescreen accident and disorient media.

0700 UTC Oct 11: Crude oil tanker SINOPA suffered explosion in cargo tanks area, followed by fire, in reportedly, early morning Oct 11, while sailing in Red sea SW of Jeddah, Saudi Arabia. Understood from Iranian sources, hull was breached, oil is leaking from cargo tank or tanks into the sea. Tanker was sailing to Suez, most probably from Iranian oil terminal in Persian Gulf. Tanker history track is missing, with Dalian recorded as last port of call, in April this year. After that date, no AIS records are visible. AIS reappeared on Oct 8 in Red sea, so SINOPA is one of those ghost NITC tankers, dodging the US sanctions.
Latest AIS signal was recorded at around 1330 UTC Oct 10, tanker was moving at 8.6 knots speed in Suez Canal direction.
Crude oil tanker SINOPA, IMO 9172038, dwt 159691, built 1999, flag Iran, owner NITC. 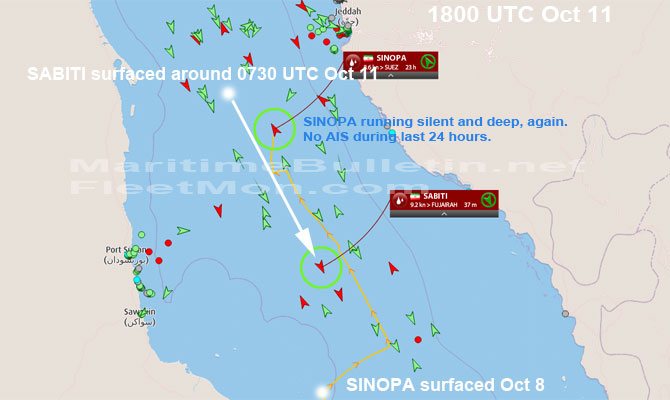 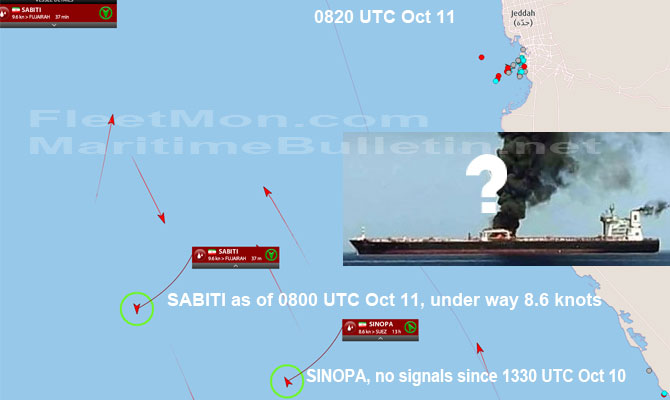 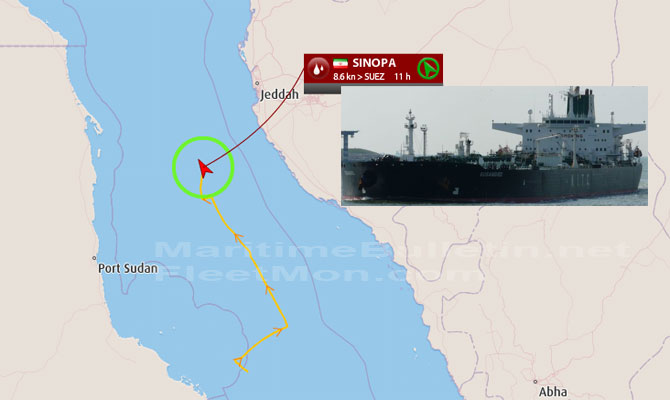