BOURBON RHODE Oct 9 UPDATE: SAR has been resumed, though at a much less scale. SAR was resumed after a surge of protests in Croatia and Ukraine, sparked by frustrated relatives and friends of missing crew, and after Croatian and Ukrainian Governments made official calls to French Government, asking it to re-think SAR suspension, and resumed it as soon as possible. Relatives already established a Fund with the main purpose of financing private jet or jets, to launch air surveillance in the area. Their hopes were strengthened by 3 rescued sailors testimonies, insistent on seeing 7 missing crew board life raft, and by Oct 7 report from offshore tug ALP STRIKER (IMO 9737230), saying that ship’s crew spotted some signals resembling distress flares. As of 0400 UTC Oct 9, 4 ships were engaged in SAR, including ALP STRIKER, plus air surveillance provided by the US Hercules C-130 plane.
But SAR isn’t as large-scale as it was, and as it should be. No French frigate with helicopter and jet, no ships directed to the area for prolonged search, to be replaced by other ships – those 3 ships presently engaged in search were deployed only after ALP STRIKER spotted flares, and may soon leave the area.
The EU, France including, spare no funds and efforts in trafficking illegal migrants, but can’t find enough resources – well, any resources – to save honest, hard-working men. What a shame!
Fundraising campaign by Bourbon Rhode Rescue: Help us find Bourbon Rhode Crew lost in the Atlantic. 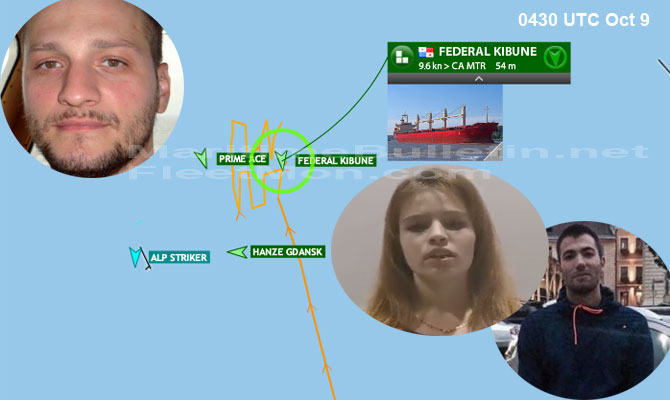