The court of Lille, France, sentenced 9 Ukrainian sailors to 5-8 years in jail, for drug trafficking. General cargo vessel CARIB PALM was intercepted by French forces on Dec 10 2015 off Boulogne-sur-Mer, and taken to Boulogne-sur-Mer for search. The ship was en route from Dominican Republic to Poland, allegedly for repairs, via Cartagena Colombia. French Coast Guard found ballasting freighter suspicious, and ordered CARIB PALM to sail to Boulogne-sur-Mer. Dogs search didn’t detect anything suspicious, but continuing search found hiding place with 2.3 ton of 75%-pure cocaine in it. Back then, it was a record drug bust for French law enforcement. Sailors said they were ordered by Captain to load cocaine, when the ship stopped off the of Venezuela coast on Nov 16. They were recruited by a fictitious crewing agency, registered in Marshall Islands and bearing a fake name.
Sailors were also sentenced to pay surrealistic fine of 75 mil euro. Who’s going to pay it, and how? Convicts are sailors, not CEOs. They’d hardly fall in for drug trafficking, be they rich enough to collect 75 mil euro among them. Ruined lives and careers aren’t enough, French justice wants to destroy their families also?
The ship remained at French port, until finally, she was dry-docked in Brest, this year, for dismantling.

Dec 12 2015:
General cargo vessel CARIB PALM arrested with 2.4 tons of cocaine on board
General cargo vessel CARIB PALM was intercepted by French forces on Dec 10 off Boulogne-sur-Mer, and taken to Boulogne-sur-Mer for search. Search found 2.4 tons of cocaine on board. Vessel was en route from Colombia to Poland, loaded according to French news, with “raw materials”. It is understood,, that it was an operation, and French law enforcement agencies knew about cocaine shipment. No news on crew. 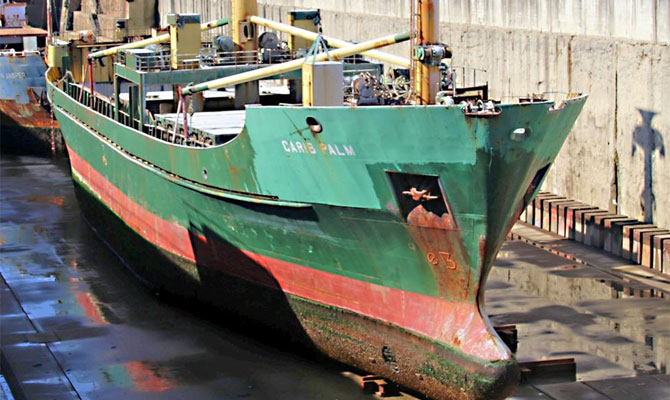