Car carrier GOLDEN RAY developed heavy portside list and actually, capsized, at around 0630 UTC Sep 8, in the St. Simons Island Sound, Brunswick, USA, while leaving port, bound for Baltimore. According to USCG, all crew were evacuated, all are safe. All traffic in the area suspended.

UPDATE: The Coast Guard said there were 23 crew members and pilot on board. All but four crew members have been safely evacuated from the ship. Apparently, weather has nothing to do with this disaster. It looks like sudden loss of stability, which may be caused by faulty ballasting, or cargo shift, or a mass of water on cargo deck – one of main dangers for ships with cargo compartments going throughout the ship both in length and width, like car carriers or ro-ro ferries. Residents of Brunswick mentioned in comment fire fighting, that if true, may explain water on cargo deck or decks.
The ship is resting on bottom, portside. Maybe, or highly probably, she was intentionally led to shallows and grounded to avoid capsizing and sinking in deeper waters.

Sep 9 UPDATE: 4 crew, all Koreans, remain missing. 6 Korean, 13 Filipino crew and American pilot rescued. There was fire, according to USCG report, and it was still on after ship capsized, according to photos. Fire is or was on cargo deck.

Sep 9 evening UPDATE: Coast Guard rescuers found four South Korean crew members trapped inside a massive cargo ship, by drilling a hole through the hull to contact them. “The early indication is they are on board and OK,” Lt. Lloyd Heflin told The Associated Press. Heflin said the rescue team is communicating with the trapped sailors through the hole they drilled, but getting them out remains quite challenging. According to Korean MFA, all 4 are alive and trapped in engine room. Hopefully, they’ll be soon rescued. Congratulations, all concerned, and hail the Coast Guard!

Sep 10 UPDATE: All four rescued. Now the main problem is the ship, which is blocking Brunswick approach channel, removal being quite a task.
With no new factors surfacing, I suppose most probable cause of negative stability is faulty ballasting, not uncommon accident on ro-ro and vehicle carrier ships, most sensitive to stability issues. 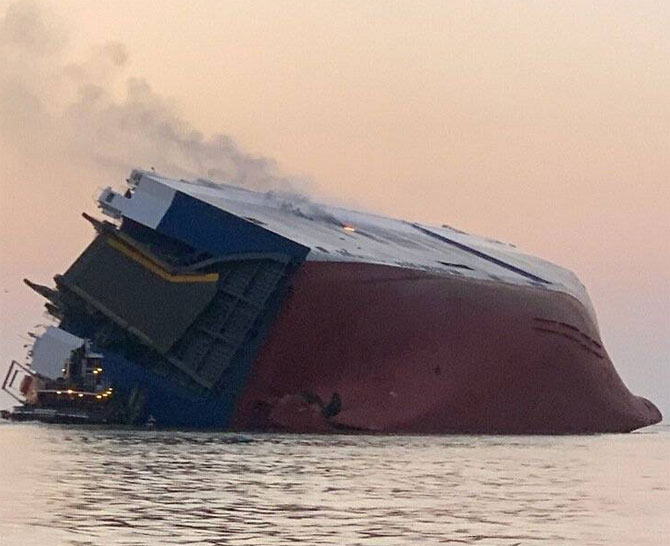 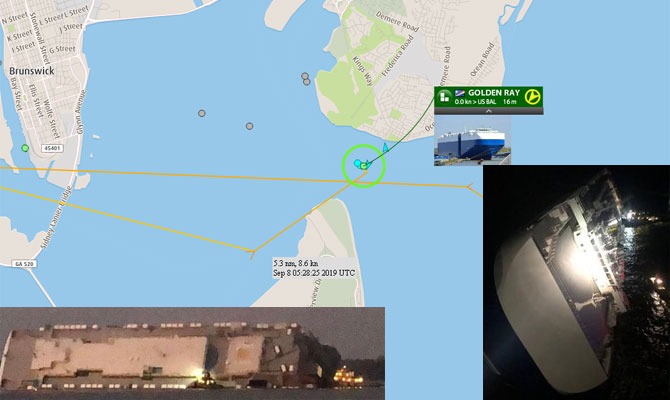 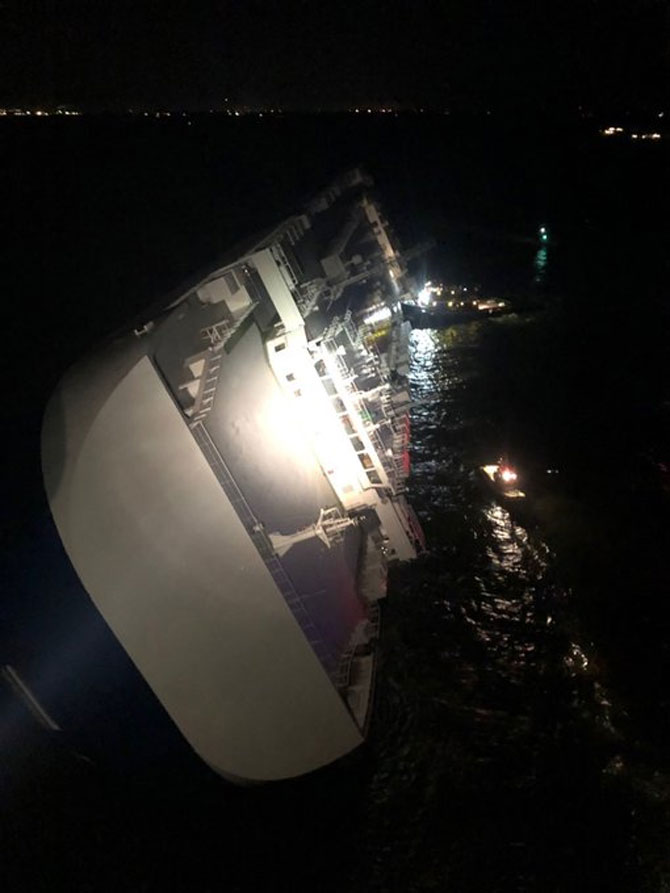