Iranian container ship SHAHR E KORD suffered fire on upper deck on Jul 25 in southern Red sea, reported Lloyd. Fire was extinguished by the crew with the help of tug MISSISSIPPI, which happened to be nearby.

Some interesting moments in this story:
SHAHR E KORD left Bandar Abbas on Jul 20, bound for Suez. After fire accident, the ship interrupted her voyage and lingered in the area until Jul 27. On Jul 27 SHAHR E KORD turned back, new port of call being Bandar Abbas. As of 1400 UTC Jul 30, SHAHR E KORD was steaming full speed along Oman coast, heading for Gulf of Oman.
Tug MISSISSIPPI (IMO 9305726), together with tug BALTIC PEARL (IMO 9321598), is towing Iranian VLCC HAPPINESS I, to Khor Fakkan UAE according to tugs AIS data, but according to VLCC AIS data, she’s to be towed to Larak Island, Iran, Strai of Hormuz. VLCC HAPPINESS I was towed to Saudi Arabia after mechanical breakdown in early May, see http://maritimebulletin.net/2019/05/02/iranian-vlcc-disabled-under-tow-in-red-sea/
Who knows, what’s all about and what happened in there. Maybe appearance of tugs towing Iranian VLCC was a lucky coincidence, maybe there’s something else. 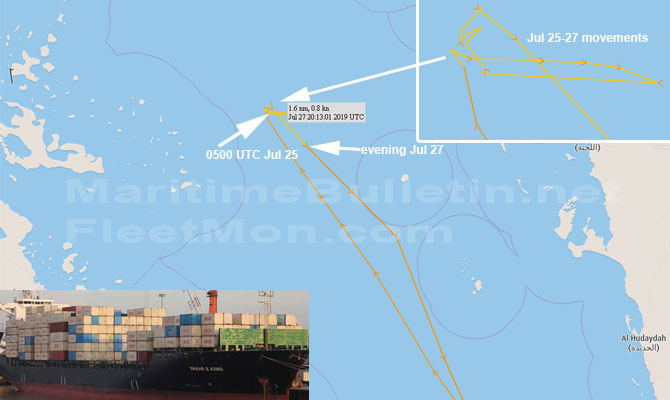