Very large crude oil tanker VLCC MESDAR was briefly detained in Strait of Hormuz by Revolutionary Guards of Iran, tanker was seized at around 1530 UTC Jul 19, and released at around 2010 UTC.
As of 0330 UTC Jul 20, MESDAR was under way in Persian Gulf, sailing to Ras Tannurah Saudi Arabia, her port of destination. Strangely enough, tanker still sails in Iranian waters.
Whereabouts of STENA IMPERO remain unknown, AIS is off, tanker and crew for all purposes, should be considered as hostages of Iran State, subject to negotiations, a chip to be bargained.
Crew Update: 23 crew of STENA IMPERO includes Indian, Philippines and Russian nationalities.

Why Iran dared to do what it did – blowing up tankers, and now hijacking them? Explanation is obvious – finding itself in desperate economical situation due to sanctions, Iran is trying to intimidate West, US first of all, into nuclear deal on Iran’s terms, and to lift sanctions. Iran believes, that the time for turning bandit is just right, that the West, flying through severe political turbulence, has become too weak to defend itself. West is seriously ill, thanks to leftists and their spearheads, UN and EU, so seriously that probably, West is beyond recovering. Iran and the likes meanwhile, will become more nasty, more aggressive, more dangerous – such States understand only force, and respond only to force, one can’t appease them or reason with them.

Ships and crews are now vulnerable not only to pirates or “environmental” lunatic regulations and persecutions, but also, to criminal behaviour of some rogue States, from Persian Gulf to South China sea.

Jul 19: UK-flagged tanker hijacked in Strait of Hormuz?
It looks like the UK-flagged product tanker STENA IMPERO was forced to move into Iranian waters while transiting Strait of Hormuz en route to Al Jubayl Saudi Arabia, Persian Gulf. Tanker turned hard a starboard at around 1527 UTC Jul 19, and moved straight into Iranian waters, as of 1620 UTC tanker continued sailing in Iranian waters, south of Bandar Abbas, at some 13.5 knots speed.
It does look like a hijack on high seas, and if it is so, it’s an act of piracy, absolutely unlawful seizure of a foreign tanker in international waters, by a rogue State military. 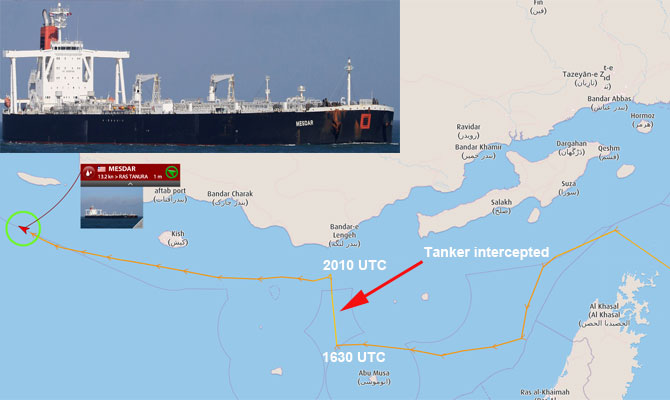