Update: Hitting pier and crane wasn’t all – SOUL OF LUCK continued moving and allided with berthed general cargo ship CERIA 8 (MMSI 525060609, length 51 meter, flag Indonesia). CERIA 8 broke off her moorings and moved along pier, accompanied by sounds of crash and steel tearing.
According to latest update, thankfully, there were no casualties or serious injures, one injured docker was treated in hospital.

Container ship SOUL OF LUCK hit pier at TPKS Container Terminal Semarang Port, northern Central Java, Indonesia, in the afternoon Jul 14, on arrival from Port Klang, Malaysia. Horrifying results are clearly seen on video – the ship struck gantry crane, resulting in crane collapse. According to local sources, in is not known yet if there were casualties or injures, area was closed immediately after accident.
Container ship SOUL OF LUCK was eventually, tackled and berthed, ship’s damages unknown at the moment. 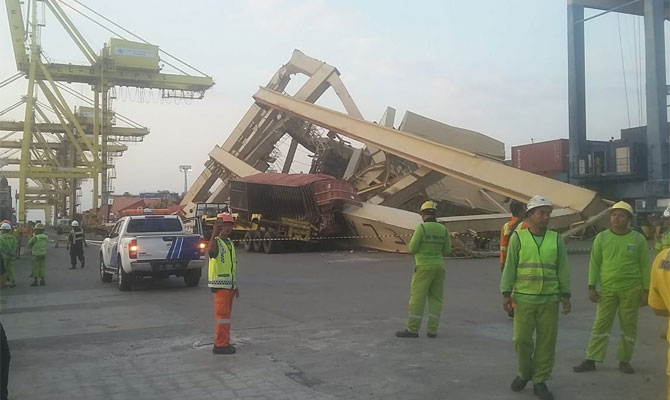