Jul 14: The ship reportedly suffered total blackout. By late Jul 13 problem was fixed, FORESIGHTER resumed moving, but away from Japan, new port of destination being Busan Korea.
Jul 13: tug FUTAMI (MMSI 431010596) at ship’s side since Jul 12, but no sign of towage.
Jul 12: As of 0600 UTC Jul 12, FORESIGHTER was in the same position, with no visible tug or other aux/SAR boat nearby.
Jul 11: Car carrier FORESIGHTER suffered engine failure in the afternoon Jul 11, anchored in position 34 02N 130 51E, some 8 nm NW of Kanmon Strait. The ship is en route from Taicang China to Moji Japan, ETA Jul 11. Probably it’s not just engine failure – the ship veered off course but reached designated anchorage, according to track, under own power at reduced speed.
Car carrier FORESIGHTER, IMO 8602816, GT 38062, built 1987, flag Panama, manager YOKOHAMA MARINE & MERCHANT. 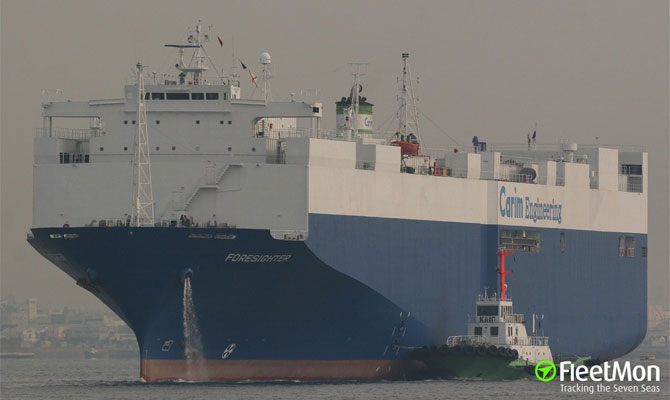