I’ve been interviewed by Russian mainstream media on tankers attacks, and each of them asked me if I know the initial source of information. Where did first news come from? I was at a loss, too. I wasn’t surprised at all when Jerusalem Post published an article, which exposes Iran as the initial source of attacks information, and all following strange, inconsistent, twisted or downright fake “news”. I recalled Fujairah tankers attacks – absolutely the same pattern. Exaggerations and fakes. Remember “news” about Fujairah port on fire? I remember all too well, because I have been talking to Russian media, explaining to them, why there couldn’t be any major fires in Fujairah port – because attacked tankers were anchored far off Fujairah port and coast.

All disinformation or twisted facts are coming from one source, from Iran. Read article published by Jerusalem Post, and if you’re interested, if you’re shipping insider, you’ll clearly see the light in the end of long black tunnel of lies and fake news:
https://www.jpost.com/Middle-East/What-was-Irans-plan-behind-tankers-attack-592566
Everything Jerusalem Post wrote correlate with facts. Check yourself.

Now to Yutaka Katada, president of Kokuka Sangyo, who said, “I’ve received reports that they saw something come flying toward them, then there was an explosion, and then there was a hole in the vessel.” He denied that the tanker was hit by a floating mine, torpedo or an attached explosive as had been previously reported. He said the damage was way above sea level.

Everybody around took what he said for granted, as a fact which disproves US version. What fact, I want to ask? Does Mr. Yutaka Katada understand what he’s talking about? No serious professional, from the very beginning, believed in torpedo version, or floating mine version. It was as clear as weather on accidents site, that torpedoes, floating mines and artillery/missile hits were to be excluded as absolutely improbable.

If crew saw “some flying objects”, which hit tanker, those objects couldn’t be missiles, and couldn’t be shells, either. Missiles are easily recognizable and couldn’t be described as “something flying”. Shells couldn’t be of a caliber enough to be fired so far away to be noiseless – it takes main caliber of a battleship, to fire and hit, being beyond the horizon. Maybe objects some crew saw, were drones which detonated via radio attached to hull mines? Maybe. It’s at the very least, no less plausible version, than the version voiced by Mr. Yutaka Katada, and his mysterious, noiseless and traceless, flying objects, which hit tanker. 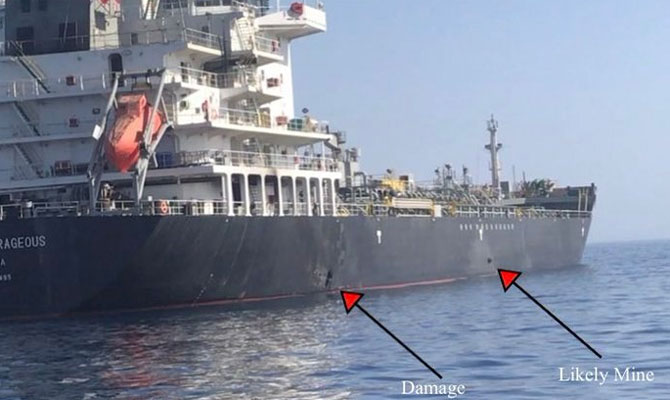