Both ships were attacked in more or less the same time in the same area, in morning twilight between 06-07 LT Jun 13, in something which looks like coordinated operation, carried out by spec-op team/teams, using sophisticated equipment. FRONT ALTAIR crew was picked up by nearby general cargo ship HYUNDAI DUBAI, reportedly by its’ lifeboat. Later the crew was transferred on board of Iranian Coast Guard ship, most probably against crew will. HYUNDAI DUBAI claimed hearing three explosions.

With US Navy being close to KOKUKA COURAGEUS, Iranian forces couldn’t “rescue” KOKUKA COURAGEUS crew in the manner they “rescued” FRONT ALTAIR crew, and as of morning Jun 14, crew may be already back on board.

There were two tugs passing by (both Dutch, curiously), at the time of attacks, one tug (Dutch tug E TWO, IMO 9831115, flag Bahamas, was en route from India to Fujairah) turned to FRONT ALTAIR, another one (Dutch COASTAL ACE service vessel, IMO 9645554, en route from Singapore to Al Hamriya UAE) steamed to KOKUKA COURAGEUS.

As of morning Jun 14, both tankers were dead in the water, E TWO being near FRONT ALTAIR, COASTAL ACE assisting KOKUKA COURAGEUS. Maybe KOKUKA COURAGEUS crew will manage to put her under way and reach nearest safe port under own power.

Iranian CG or whatever boats and ships were kind of, circling around FRONT ALTAIR for quite some time, keeping situation under their control. Questions:
Who took photos of fire on FRONT ALTAIR cargo deck from tanker’s bridge?
Who switched on FRONT ALTAIR hydrants?
Could fire be extinguished by E TWO’s two cannons only?

There’s the US Navy video https://www.youtube.com/watch?v=t5rZeMqvZ9g , showing allegedly, the removal of the magnetic mine by IRGC Gashti Class patrol boat from KOKUKA COURAGEUS starboard hull in cargo tanks area. Video seems to be genuine. All things taken and considering, Iran is highly likely main or only suspect in these outrageous terror attacks, unless some other facts and details prove Iran innocence.

Now most important questions for the shipping in this crazy region:
Who’s behind terror attacks, and are the attacks a real high-level risk?
Well, as of now, unless proven otherwise, everything points at Iran, though there are quite a number of parties, interested in raising tension and fear in region, specifically – in disrupting oil transportation. Oil price is going up, you know. But with that in mind, still, a chance of situation spinning out of control feels to be highly unlikely.

How to provide maximum safety and avoid attacks?
With Fujairah anchorage attacks and Jun 13 attacks being so similar, some conclusions may be drawn. What are the similarities? In both cases, tankers were attacked with explosive devices, somehow delivered, and attached to tankers’ hulls, in most favourable weather conditions – no wind, calm seas. It leaves us with two options: either devices were delivered by drones (mentioned in some of Fujairah attack analyses), or by fast small boats, RHIBs or similar, manned with spec-op teams.
Drones are bad news, there’s no way crews can detect them and avoid deadly contact. RHIBs are better option to defend from, if there’s anything “better” or “worse” in this madness. RHIBs may be detected and scared off, but for this, merchant ships require guard teams on board, armed with nigh-time vision optics and sniper rifles. That’s the best and most safe, guaranteed safe in fact, option.

Instead of whining constantly on how “extremely worried” they are, or giving idiotic advises to stick to BMP5, so-called “maritime” bodies should, be they maritime not all-politics, at least release maximum information on Fujairah attacks – how they were carried out and what explosives were used. If they can’t do it, they should say so, explaining why it’s impossible, and who’s keeping this info secret. They should advise wide-spread use of private armed guard teams with special equipment, and promote security teams as best as they can, not to demonstrate, once again, their utter incompetence by advising “to be on alert”. What do they think (well, providing they think at all about anything beyond their careers) crews are doing in this dangerous region? Drink vodka and play balalaika? 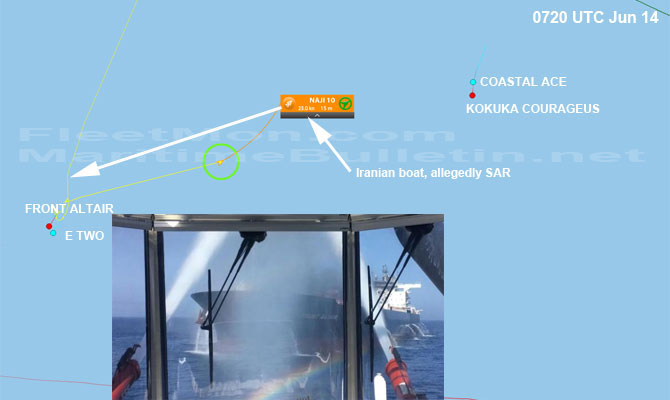