There was an article published by SPLASH recently, “The PSC regime needs to be more human” https://splash247.com/the-psc-regime-needs-to-be-more-human/ with fresh ideas on how to improve PSC and make it more friendly.
I won’t quote author’s ideas, in order not to waste readers and my own time. There’s one assertion though, which deserves quoting: “The detention ratio has dropped significantly and the average deficiencies per inspection are down to less than three per inspection.” PSC statistics are very convoluted, and I was able to find annual detentions statistics only on Paris MOU website. Statistics are rather curious. Detentions number dramatically dropped, in fact halved, in years 2006-2011, and since then, remain more or less stable at 600+ detentions per year level. How to explain it, I don’t know. Most probably, because of a number of reasons – shipping empirically, found the best ways to deal with PSC and extra burden MLC, and maybe, national authorities had to curb too zealous PSC, because growing number of detentions started to harm national economies.

Now about ideas on making PSC more friendly, and why such ideas are nothing but wishful thinking. The basic concept of PSC is rotten and vile, it’s a pure socialism. Concept is very simple – people are too stupid to be trusted with anything, including their own personal safety, they have to be guided, controlled and regulated. Give us – those who know how to do it – power, and we’ll look after, in our case, maritime safety. Any structure built on such concept, will inevitably develop into a bureaucratic uncontrollable monster, choking and sucking dry of life anything it controls and regulates, and cultivating corruption.

Look around and try to count the number of organizations and institutions, which are regulating our lives, at public expense. Their essence is essence of parasites. They take, they don’t give. They don’t bear any responsibility, they don’t produce, and they don’t just waste tremendous resources – they actively harm and ultimately, destroy economy, society and public morals.
SPLASH contributor, in other words, is pleading parasite not be so parasitic. Well, good luck with that. But any person acquainted with bureaucratic ways and structures will immediately and unerringly predict the result of attempts to bring in cosmetic amendments. If accepted, they will lead to the invention of new regulations, more ridiculous and incongruous than existing ones, adding to shipping miseries. Like you know, that rest\work hours registry book nonsense. Like MLC regulations. Like many other insane things.

The only effective way to deal with PSC and the likes, is a complete revise of modern system of regulating shipping, leaving as less regulations and controlling bodies, as possible. Plus implementing effective ways to make regulators and enforcers transparent, accountable and punishable. Not vise versa.
Things went too far for modification and transition back to common sense, too many people and organizations depend on existing deeply rotten and vile system. Only crisis may (and inevitably will) change it all, nuke existing order and disinfect our home from parasites, at least for some time. 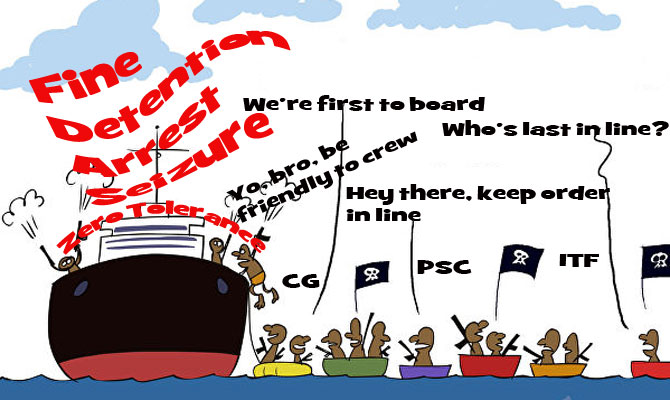