31 crew of Suezmax crude oil tanker SEA SHARK called Russian News Agency TASS and asked for help, describing their dramatic situation https://www.vesti.ru/doc.html?id=3148408. Owned by UAE-based company tanker loaded a shipment of crude oil at Kharg Island Oil Terminal, Iran, and sailed to Suez in late Oct 2018, where tanker stopped, “waiting for further instructions” and flag change, because “Panama flag registry expired”. Highly probably cargo of oil was to be delivered in sanctions violation, maybe to Syria, maybe somewhere else. (see http://maritimebulletin.net/2019/04/11/indian-suezmax-tanker-covertly-delivered-iranian-oil-to-syria-and-ran-aground/ as an example). Tanker was seized by Egyptian Navy in late November 2018 for, officially, “illegal entry of Egypt waters”, though according to crew, the ship moved some 2 nm into Egyptian waters, in order not to lay dead in heavily trafficked waters of Red sea shipping lanes.
According to AIS track, tanker was taken to Ras Banas anchorage, southern Egypt, and kept there until Apr 25. On Apr 25 tanker left anchorage and moved north, to Sokhna coast, where she was anchored on Apr 27, and remains anchored since that day.
According to crew statement, Egypt imposed on owner $56 mil fine, for “illegal entry”. Owner is trying to appeal, while crew remain on board, growing desperate. Understood there are no wage delays, but contract time for all of the crew expired, with little hope of replacement. Crew includes 17 Ukrainian citizen, 2 seamen are from Crimea, 1 from Azerbaijan, and 11 from Philippines, Sri Lanka and India.
Tanker with some 1.1 mil barrels of crude oil worth some $75 mil is seized, and $56 mil are demanded for its’ release. One Middle East country seized tanker belonging to another Middle East country, loaded with crude originating from third Middle East country and destined, highly probably, for a fourth Middle East country. Is there anyone who understands anything about Middle East situation, conflicts and disputes, including Middle East nations themselves? Who’s against whom or with whom, and to what purpose?
Crude oil tanker SEA SHARK, IMO 8919154, dwt 163038, built 1991, flag Panama, owner/manager AL SAFEENA AL BAHRIA SHIPPING, UAE. 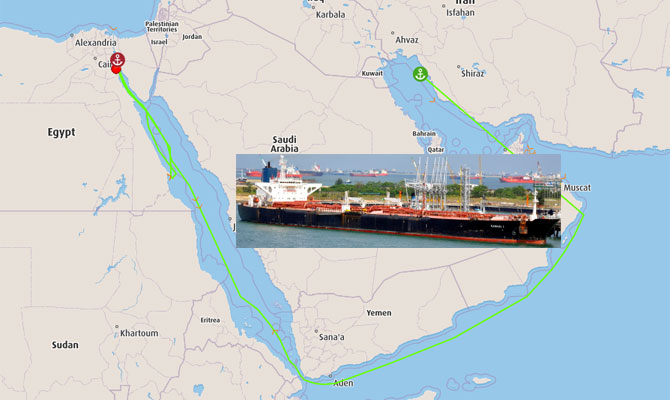