May 15 1500 UTC: Fire said by officials to be under control. At around 1130 UTC GRANDE EUROPE taken under tow, to be towed to, understood, to Palma de Mallorca. There are 1843 vehicles on board. Fire seemingly, was restricted by superstructure compartments, cabins and service compartments most probably.

Car carrier GRANDE EUROPA caught fire early in the morning May 15 in Mediterranean, due south from Palma de Mallorca, Mallorca, Spain, while en route from Naples Italy to Valencia Spain. The ship went out of control at around 0330 UTC, see track. Several SAR and firefighting ships and boats already deployed in fighting fire, from 25 crew on board 14 were evacuated by helicopters, understood as non-essential, the rest remain on board and take part in firefighting.
Fire seems to rage below bridge, doesn’t look like it’s on cargo deck, so hopefully, it won’t develop into major fire engulfing cargo decks and cars/vehicles parked there.
Car carrier GRANDE EUROPA, IMO 9138381, GT 51714, built 1998, flag Italy, operator GRIMALDI EUROMED. 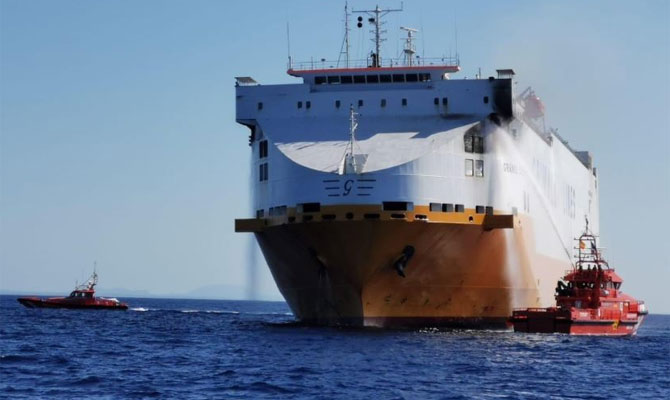 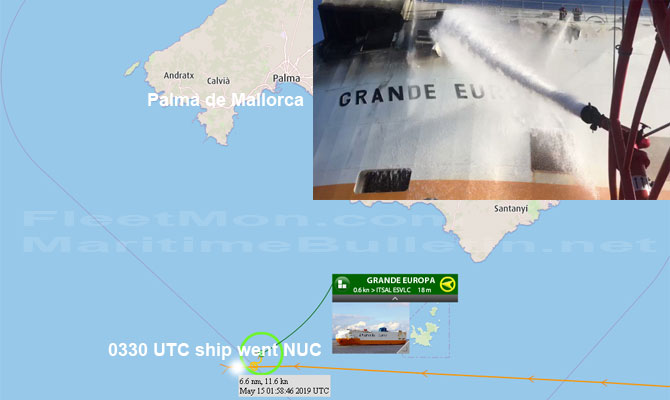